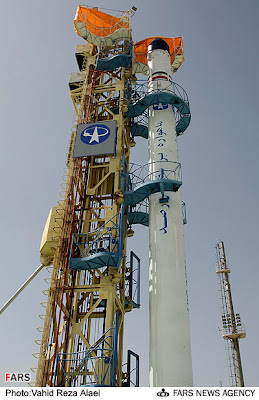 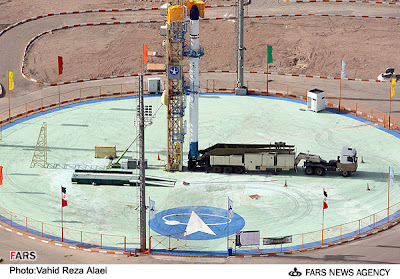 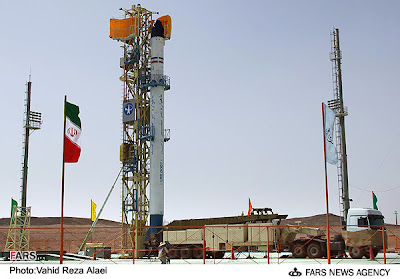 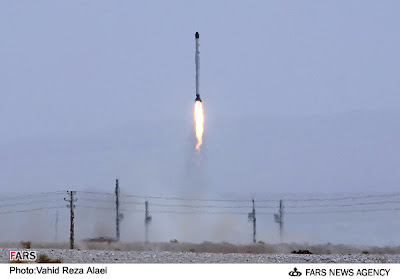 The following is an extract from an interesting article at “All Things Nuclear” website which is a blog of the Global Security Program at the Union of Concerned Scientists.

“The U.S. Space Surveillance Network (SSN), which uses a sophisticated set of sensors to track objects in space, located two objects from the launch and added them to its catalog of space objects, confirming that Rasad achieved orbit. (The other object is the upper stage of the Safir launch vehicle; this stage had reached orbital speed when it released the satellite and is in an orbit about 5 km lower than the satellite.)
The SSN data shows that the satellite is in a nearly circular orbit, with an apogee of 297 km and a perigee of 236 km, and an orbital period of just under 90 minutes. This generally agrees with the altitude announced by Iran.
The data also shows that the satellite has an inclination of 55.6 degrees (the angle between the plane of the satellite’s orbit and the equatorial plane of the earth). This means that the launch was in a direction about 45 degrees north of due east. That carried it up over Kyrgystan and Russia.
To see Rasad’s orbit in Google Earth, go to Wang Ting’s What’s Up website.”

Rasad can be tracked at http://www.satellitedebris.net/whatishappening/?p=33

Rasad can be tracked at http://www.satellitedebris.net/whatishappening/?p=33

Thanks for the links. They're much appreciated.

Anyone else angry that Iran totally stole the the arrowhead symbol from Star Trek for their space logo?

LOL, now i can't unsee this! oh and just wondering is this the same launch as the one with the monkey?