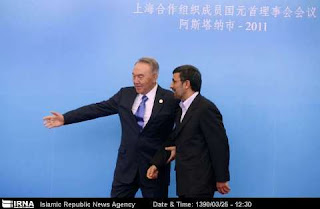 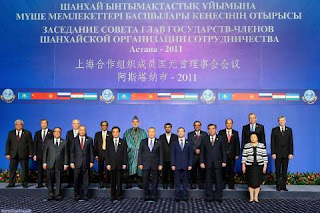 Bottom Photo: The heads of state and government of SCO members, Kazakhstan, China, Kyrgyzstan, Russia, Tajikistan and Uzbekistan (front row) joined by the leaders and representatives of Iran, Afghanistan, Pakistan and India at the 10th Summit of Shanghai Cooperation Organization.

In his address today to heads of state at SCO Summit, President Ahmadinejad attacked Western countries as “enslavers, colonialists and invaders” and in effect called for an anti-West alliance to counter the US influence in the region.

Formal speeches by heads of state aside, the discussions on the sidelines of the summit are expected to be dominated by the future of Afghanistan after the US and NATO pullout. And the big elephant in the room would be the newly found vast mineral resources in Afghanistan and the start of the sequel to the Great Game and rivalries among the regional powers and between them and the West.

This is the second time you mention

I wonder, are you referring to those deposits declared by the Pentagon (I think it was last year)?

Or are these new recent found resources?