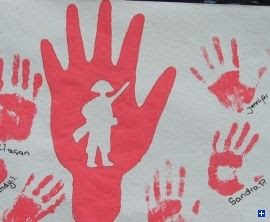 In a further twist in the 31 year saga of progressive sanctions on Iran, the United States today placed a further third set of sanctions on a group of Iranians including the Iranian Red Crescent (Muslim Red Cross), the Blind Orphans of Tabriz, Mahak Children Cancer Society, and the Iranian Boy's Scouts Organization and all their affiliates in the provinces. These new sanctions further tighten the screws and prevent the nuclearization of Iran. The entities were last sanctioned last October and firstly in January of that year. The White House hopes this time around this new pressure will force these entities to finally stop their tireless efforts in support of the government and building the bomb.
Sanctions have been placed on Iranian Red Crescent as the head of this organization Mrs. Fariba Karshian had organized an event to raise funds for the Japanese quake victims when suddenly and with evil intentions a motorcade of Revolutionary Guards passed by and stopped for a bite to eat across the street. In a statement the State Department said, " this blatant choice of location for the quake victims of Japan was an outright slap across every Japanese face, dead or alive, mutated or not". The State Department requested all foreign countries that will not be affected by the US sanctions to follow suit and not allow any employees of the Red Crescent to deliver their humanitarian supplies to any future victims.

The blind orphans of Tabriz were caught red handed, LITERALLY. On the infamous play day two weeks ago, 13 unlucky orphans (no pun intended) were doing hand paintings when one of the orphans stumbled and spilled a large jug of red paint all over the place and in particular in the color bowls of the children. They continued their paintings not knowing any better when a local newspaper caught a picture of their act. The Department of Defense today said, "We have requested that the Blind Orphans of Tabriz be included in this latest set of sanctions as the likelyhood of these future terrorist growing up and blindly aiding (pun intended) the nuclear drive is high as the photos demonstrate."

Most troublesome of all have been Mahak Children Cancer Society which after two sets of sanctions have refused to not dabble in nuclear material. Mahak is a non-profit organization that gathers unknowing poor children from across the provinces and offers them death or free cancer treatment using chemotherapy. The White House was this time furious and issued the following statement, " After repeated warnings, Mahak continues to use nuclear radiation to dose their patients. They claim that the children would die without this treatment and we simply ask the question that's on everyones mind, are we sure they will die without chemotherapy??" The White House hopes this time around pressure will build that Mahak will give in and stop its malicious gathering of poor province children.

The Iranian Boy's Scouts Organization is also an entity that has been heavily targeted in the past and again today. The Department of Defense was also influential in this decision. The Defense Secretary asked reporters, "The name says it all..... Scouts!! What are they scouting; camp sites or possibly new nuclear facilities." He continued, "Does anyone really know what these adolescents are doing? When the Iranian government agrees to finally place ankle bracelets on these so called "Boys Scouts" and uploads the data live on the internet than we can talk about reducing these sanctions."

The sanctions prevent any American to work with, provide or transfer funds, contact, walk within 500 meets of, look directly at, enter a plane with any of the individuals, or vacation in a country which also hosts them.
Posted by Amir Taheri at 7:12 AM

Thanks Leopersica, I was motivated by the latest sanctions ;)

Excellent but I wish you had not put the word "satire" at the beginning of your piece. It was not necessary and if you don't mind my saying so it rather diminished the impact of an otherwise very witty and lovely piece.
Look forward to reading more from you.

PS. Considering the United States' penchant for imposing sanctions of all sorts on Iran, don't be surprised if you find one or two of the entities you mentioned in your piece are subjected to severe sanctions in a few months from now.

Good writing Amir Taheri. We could do with a good laugh here.lol :)

It shows the futility of the entire sanction regime by the US against Iran.It doesn't even make sense anymore! The whole thing's not even about Iran's perceived nuclear weapons program anymore but a pure obsessive hatred of anything Iranian wrapped up in "We care for the people of Iran - not their government" mantra.

Basically, they've run outta options and the sanctions seems to be the only tool left in their toolbox. Heck, they'll sanction water resources and air in Iran if they could.

They would also starved the entire population of Iran into submission, if they could.

If I were Iran's shoes, I'll go nuclear full-steam because it doesn't really matter what they do, they'll still get sanctioned anyway.

Funny thing is, these same policies wear out in the long run and exposes the idiocy of US policy towards Iran. Mark my words, all US "allies" will be abandoning them one by one the longer this nonsense go on.

Funny but not far from the truth. Soon sanctions will be placed on any fish, or bird who may have migrated inside of Iranian territory for fear that they could be transporting nuclear material.

What a delightful posting Amir! I thought you abandoned the readers of this gem of a blog for good. So good to have you back. Delight us more!

Thanks Reader, out of sight but not out of mind ;) I will start a weekly column as of this Friday. Thanks again for the kind words!