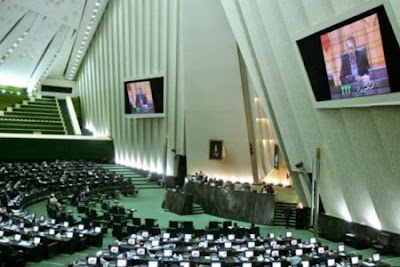 Majlis, the Iranian parliament, today called President Ahmadinejad’s decision to appoint himself as the acting oil minister “illegal” and referred the case to the Judiciary. The resolution was passed by a vote of 165-1 with 13 abstentions [ICANA, 1 June]. Last week, the Guardian Council also ruled that the president’s decision to take charge of the ministry was unconstitutional.

Iran is due to hold the one-year rotating presidency of OPEC on 8 June. As acting oil minister, Ahmadinejad could preside over the annual meeting of OPEC in Vienna scheduled for that day.

Does this move by the Majlis defy Supreme Leader Ayatollah Ali Khamenei recent call for an end to the crisis within the country's ruling circle and asked the parliament and the government to work together?

Anyone? Why is the Majlis pressing this issue when the President has 3 months to appoint an oil minister? There is no law demanding that he appoint an interim minister before a real minister. In fact, the President has 3 months to deliberate on the matter, which technically allows him to be the interim minister of any cabinet position he wish to replace, unofficially. Isn't the Majlis being childish? No?

Is the above interpretation wrong? Anyone with answers?

Khamenei’s call for an end to the crisis contained a major condition: that the government must obey the laws as passed by Majlis and interpreted by the Judiciary. Here the MPs are arguing that Ahmadinejad’s move was illegal, relying on a ruling by the Guardian Council last week that the president could not be an acting minister as well and his move was unconstitutional. The Majlis actually is referring Ahmadinejad to the Judiciary charging him with actions against the laws and the constitution of the IRI, this is a very serious matter that could lead to Ahmadinejad’s trial by the Judiciary or impeachment by Majlis.

In the USA, a girl blows the pres. a few rounds and thus the Parliament/ congress moves against their Pres.)

in Iran the parliament moves to legally halt or divert plans of their pres. ... you call it a 5 to 12 happening and start to pack your bags, hoping to become a minister in a few weeks ..