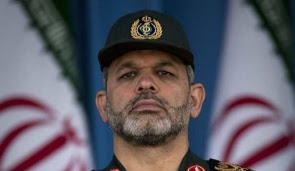 “[The development of] sustained stability and security is Iran's strategic policy toward the brother and friend nation of Afghanistan,” Vahidi told reporters upon his arrival in the Afghan capital, Kabul, on Saturday, IRNA reported.

He pointed out that Tehran is ready to expand relations with Kabul in various areas, including campaign against drugs and terrorism as well as defense cooperation.

Vahidi went on to say that the security of neighboring Afghanistan is of high significance to Iran, adding that the Islamic Republic will spare no effort to help the restoration of lasting security in its eastern neighbor.

The Iranian minister is in on an official visit to Afghanistan at the invitation of his Afghan counterpart Abdul Rahim Wardak.

Vahidi is expected to meet with Afghanistan's top political and military officials, including President Hamid Karzai, Interior Minister Hanif Atmar and his Afghan counterpart to discuss issues of bilateral interests as well as the latest regional and international developments.

This is the first visit of an Iranian defense minister to Afghanistan since the 1979 victory of the Islamic Revolution in Iran.

This is an extraordinary visit by Defense Minister Vahidi, a Revolutionary Guard brigadier general, while Afghanistan is currently under a NATO/ISAF military occupation. Vahidi himself has been on an Interpol "red notice" since November 2007 over a controversial investigation into a bombing attack that took place in Argentina in 1994. In addition, the United States has listed Iran's Revolutionary Guards as a "terrorist organization;" from time to time accusing it of providing limited aid to the Taliban insurgency.

The visit takes place at a time when President Karzai has announced during a speech at the presidential palace that his government and the U.S. have begun preliminary negotiations with the Taliban aimed at ending the conflict.
Posted by Mark Pyruz at 11:18 AM