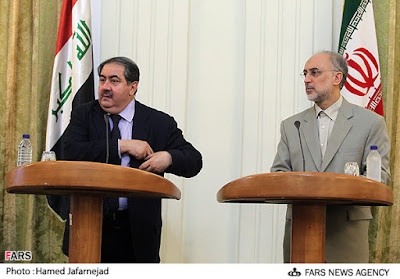 The Iraqi foreign minister says members of the terrorist Mujahedin Khalq Organization (MKO) must leave Iraq, stressing that Baghdad's stance on the issue is crystal clear.

“Camp Ashraf is to be shut down, and members of the [MKO] group have been given until the end of the current year (2011) to leave Iraqi soil,” Hoshyar Zebari said during a joint press conference with his Iranian counterpart Ali Akbar Salehi in Tehran on Tuesday, the Fars news agency reported.

He went on to say that Baghdad has proposed that a trilateral committee be established to discuss the situation of the terrorist organization.

Tehran and Baghdad also plan to hold talks with the Red Cross to discuss the future of the MKO members residing at the camp, he added.

Zebari also said the Iraqi government has suggested on several occasions that arrangements be made to facilitate the repatriation of the MKO members who want to return to Iran.

Elsewhere in his remarks, the visiting Iraqi official underscored that the US military's presence in Iraq will not be extended unless Baghdad deems it necessary.

He stressed that the Iraqi people do not approve of the US military presence in their country, touching upon a security pact between Baghdad and Washington which requires that the withdrawal of American forces from Iraq by the end of 2011.

“The extension of US troops' presence in Iraq is not an issue, unless the Iraqi government wants them to stay,” he said.

The Islamic Republic of Iran has seen diplomatic gains in the region as of late, with Defense Minister Vahidi meeting with Afghanistan's top leadership, to the east, and Foreign Minister Salehi reaching agreement with his Iraqi counterpart over the MKO terrorist issue, to the west. What's more, it was announced today that Iran's First Vice-President Mohammad Reza Rahimi is scheduled to visit Iraq on July 6 to attend a meeting of the Tehran-Baghdad High Commission of Economic Cooperation.
Photo: Hamed Jafarnejad at Fars News Agency
Posted by Mark Pyruz at 10:23 PM