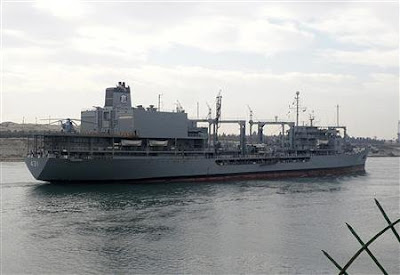 The Arab press has termed the visit to Syria by the Iran Navy Task Force as a show of support for the Syrian President Bashar al-Assad’s embattled government.

I wonder of what was picked up

Probably their stooge Assad was picked up and taken to his filthy masters in Tehran.

Syria/Hezbollah are an important neighborhood tactical retaliation base.

That was a long and expensive trip to turn around and return with nothing resolved... Syria may crack within next 10 days- the visit looks more like a stop and drop imho.

The ultrashort stay this time around maybe indicative of some ambivalence on the part of the IRI. Afterall, logic dictates that the Assad regime is history, and the regime in Iran, an Hezbollah, has got be planning for the after Assad era.

begin stocking up on gasoline, and keep vehicle tanks near full.

That corvette must be 50 years old by now.

Syria may crack within next 10 days

Someone said Assad will be gone within 2 weeks when this Western backed chaos started.And here we are today. No government will stand idle when there's an armed insurrection..Particularly when it's foreign backed..

You guys can have your wet dreams with your "Assad fall" predictions.I can assure you he'll still be there and the foreign backed opposition will be marginalize in Syrian society..Their destructive tendencies don't make them desirable for the average Syrian.Guess what? Even Al-Qaeda supports Syrian democracy now..Who knew??.

Don't keep huffing and puffing!
Time is on the Syrian peoples side and Assad is already history!

Don't worry they will just give the corvettes a new paint job and proclaim that they have manufactures latest generation "stealth" ships.

"Time is on the Syrian peoples side"

That's absolutely true, but what you forgot to mention is that Syria's people wholheartedly support their President Assad!

Anybody that supports this opposition, whom Al-Qaeda has come out publicly to support, must have their heads examined.

Sometimes the enemy of your enemy isn't necessarily your friend.

The Zionist shills on this Blog are nothing but emotional reactionary losers..They make decisions based on emotions and not logic.

Any foreign intervention in Syria will see missile raining down on Israel proper..Careful what you wish for.

See how Erdogan stopped making stupid threats lately? he just realized the consequences of such actions.

The Zionist shills on this Blog are nothing but emotional reactionary losers..They make decisions based on emotions and not logic.

Logic and absence of emotion dictate that Assad, his brothers, and his cousins have the right to rule Syria for as long as they want and anyone who opposes them deserves tanks, rockets, bullets, and torture. The only people who would oppose all of the wonderful things and tremendous living standards of Baathist Syria are Zionists, Bin Laden's sons & wives, Salafis, and the Mossad-AIPAC-Zionist-MEK-CIA-MI6-Qatari-Saudi-Wahabi-Jordanian-Turkish criminal conspiracy. Long live Assad Junior!

if you dont support zionist then you will be history