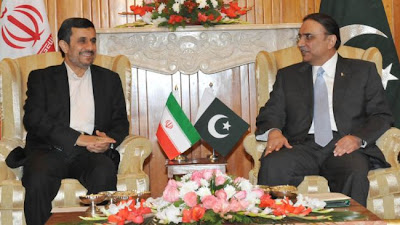 Iranian President Mahmoud Admadinejad met Pakistani President Asif Ali Zardari on Thursday in Islamabad ahead of a tri-lateral summit of the leaders of Iran, Afghanistan and Pakistan.

The proposed IP pipeline originally included India, but the Indians withdrew their participation and opted instead for the US-backed Turkmenistan-Afghanistan-Pakistan-India (TAPI) gas pipeline. Iran has completed the construction of IP pipeline on its side, but the Pakistanis, despite their repeated expression of interest and commitment to the project, are yet to start any work on their side.

Iran has also offered Pakistan deferred oil payments, but that offer was quickly and unexpectedly met with a similar offer from Iraq. The Pakistanis are reportedly negotiating with the Iraqis to finalize a long-term oil contract.


Amid the US-led publicity campaign on the prospect of an Israeli military strike on Iran, Pakistani President Asif Ali Zardari says his country will support Iran against any foreign aggression, Press TV reports.

Islamabad will also not provide any assistance to Washington over a conflict with Tehran, Zardari told reporters in a joint press conference with his Iranian and Afghan counterparts Mahmoud Ahmadinejad and Hamid Karzai in Islamabad on Friday.

The Pakistani president further stated that Islamabad would not permit foreign pressure to affect its ties with Tehran and stressed the importance of implementing a joint gas pipeline project with Iran.

mat, while what Zardari said is welcomed news, Pakistan itself is in no position to do anything..His country is currently under attack by US drones almost on a daily basis and he can't do a damn thing about it..
I wouldn't read too much into what Zardari(Mr. 10%) says..

He's not the one that calls the shots..

mat..stop holding on to straws Zardari is a charlatan.
There is a saying in Iran that a Pakistani will rip off their mothers nipple to sell it.