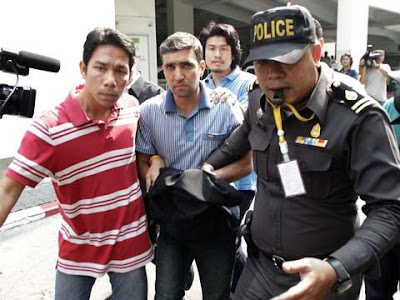 The Thai police announced today they are searching for more suspects in connection with the Tuesday’s explosions in Bangkok. Three Iranian nationals have been arrested in Bangkok and Kuala Lumpur already and the arrest warrant for a fourth Iranian has been issued. The Thai police have accused the four for conspiracy to assassinate Israeli diplomats in the country.

Police say one of the two additional suspects being sought was seen on closed circuit camera footage leaving the same house where the first of Tuesday's blasts occurred. The three men in detention have also been filmed leaving the house after the explosion.

One of the suspects, Saeid Moradi, was seriously injured and lost his legs when a device he was carrying exploded on a busy street while being chased by the police. A second suspect, Mohammad Khazaei, pictured above, was arrested at Bangkok’s airport. A third suspect, Masoud Sedahgatzadeh, was arrested by police in Malaysia while trying to fly out of Kuala Lumpur airport. The fourth suspect, a female named Leila Rohani, who had rented the house that was damaged by the first accidental blast, had already left Thailand.

Thai police chief Prewpan Dhamapon has said the explosives in the Bangkok blasts were similar to those used in recent car bombing attacks targeting Israeli diplomats in India and Georgia. Four people were injured in the New Delhi attack, while the car bomb in Tbilisi was defused.

This anti Iranian Terrorist regime has truly blackened our faces in the eyes of the world.

There was an article today about the the organization called SWIFT. It essentially handles all of the telecommunications and clearing that allows banks to move money around the world. There is now news that SWIFT is going to discontinue its services to blacklisted Iranian banks. This seems like it could truly cripple Iran's financial system and economy. In this scenario, they would essentially be reduced to barter deals. The question is, will this make Iran more serious about negotiating, or will there be further attacks like this?

To the supporters of the IRI in the west: events and Photage like this are the reason many of you use the word "Persian" instead of "Iranian" to describe yourselves to your western friends.
The present is so negative thanks to the Islamic republic that most Iranians overseas are ashamed to admit their h eritage. What a shame!

While the regime in Tehran is fully capable of pulling the strings in these kind of activities, one can also think that there are others who would directly or indirectly benefit from these acts (perhaps the current occupants of camp Ashraf or even the Israelis themselves).

Believe it. Iran regime sponsors world terrorism and is responsible for a large part of the evil that exists in this world.

Seriously guys..What serious hitman will carry his own passport and a pocket full of Iranian rials on an assassination mission? I mean, who's fooling who here?

And somehow all these bombs failed to explode and where all "intercepted".Even the Mossad woman in India (diplomat) somehow managed to get escape with minor injuries before the bomb goes of..This is after Mossad chief visited India a couple of day earlier. And also the fact that Indian investigators where prevented from collecting evidence at the crime scene by Israeli embassy officials(Mossad).

Even the CIA with all their sophistication FAILED to stop a couple of guys with box cutters on a plane on 9/11..Lets be serious here for once and not let our hatred to the Iranian government cloud our judgement. I can smell BS in all this hysteria..Where it's coming from is the "mystery". But I think I have a pretty good idea who might be behind it..Lets all wait for the investigation report. I bet it'll never see the light of day either.


A new Guardian report says while it is unlikely that Iran was behind the bombings in India, Georgia and Thailand, the attacks provided Israel with an “expedient” pretext to demonize the Islamic Republic.

“It is hard to imagine that the Iranian government would send Iranian operatives to friendly countries, completely equipped with Iranian money and passports - making the case against them as obvious as possible,” Arshin Adib-Moghaddam wrote on The Guardian .

The political analyst and author asked how could Iran’s Islamic Revolution Guard Corps launch such a “clumsy and self-defeating operation” when, as has been repeatedly admitted by Israeli politicians themselves, they are such a “professional, highly trained and politically savvy” organization.

“What would be the motive for damaging relations with one of Iran's major trading partners and regional heavyweights?”

“Similarly, Iran has good economic and political relations with Georgia and Thailand,” Adib-Moghaddam said, adding, “It is politics that will prevail over the truth in this case.”

“Undoubtedly, it (Israel) will attempt to derail Iranian-Indian relations, which has been a primary objective of the administration's grand strategy to isolate Iran,” Adib-Moghaddam said.

“Certainly, on the fringes of the Israeli right wing the drumbeats for war will beat louder,” Adib-Moghaddam concluded.

*Such a simple case like this, only those stupids would have really believe it.

Mossad fingerprints all over it, and their lackeys - the poor MEK operatives that were promised $$$. Now watch how the sheeple get duped by the Zionists (Jews), its a sad view.

If Iran were behind this, they would have succeeded, and there would not have been any Iranian involved in the first place.

This is so Amateurish from Mossad lol... but Israeli addressants are idiots and facts don't matter anyway.

thats why you guys use the term "Arab" instead of Egyptian or Morracan or whatever...

starting from being drig pushers right down to slave holders is not very flattering to be Saudis or morrocan or etc.

Iranians can use whatever term they wish, they are respected and prayed for by all except hypocritical jealous buggers.

Bless Iran and all Iran iaNS EXCEPT THE mko


Iran’s Ambassador to Thailand Majid Bizmark says the Israeli regime is the key suspect in the scenario of the recent explosions in the Thai capital, Bangkok.

"If we follow the issue closely and wisely, we'll find out who is behind the scenario,” Bizmark said in an interview with the local daily the Nation, adding that the main suspect is the Zionists (Israelis).

Bizmark further said that the Iranian embassy in Thailand has deep doubts about the actual nationality of the suspects detained by Thai and Malaysian authorities with the alleged Iranian passports, and whether they were indeed Iranian citizens.

"We don't know who they are... They could be anybody," the Iranian ambassador said.

Right mat and I presume Israel was behind the attacks that killed a number of people in Argentina?
The criminal that was behind it is a minister in the Islamic regime.

First and foremost, both the "Persian empire" and modern day "Iran" was and is made up of diverse ethnic groups, and when put together, the nonpersians outnumber the Persian. A small example of that diversity is that the Persian navy in the wars against the Greek was made up of Ionians (Greeks on the Asian side of the Mediterranean), and their ground forces were made up of many ethnic groups from Indian to Egypt, and included Arabs.

According to Webster dictionary:

Definition of FASCISM
often capitalized : a political philosophy, movement, or regime (as that of the Fascisti) that exalts nation and often race above the individual and that stands for a centralized autocratic government headed by a dictatorial leader, severe economic and social regimentation, and forcible suppression of opposition?

: a belief that race is the primary determinant of human traits and capacities and that racial differences produce an inherent superiority of a particular race
----
Keeping those definitions in mind I would say that:

Persian=ethnicity
Not all Iranians are Persians, and, in fact, not all Persians are Iranians (the Parsi race has lived in India for many years and there are many Persians in Iraq, the Persian gulf states and central Asia who no longer see themselves as Iranian and are not nationals of Iran.

Not all nationals of the "Arab countries" are Arab, and not all Arabs are nationals of Arab countries. For example there are Arab turkes near the syrian border who only speak Arabic but carry the Turkish nationality only.

So back to the use of the word "Persian" instead of "Iranian" in defining oneself to non-Iranians.
I think there are two scenarios for the reasons for this common misuse of the words.

1. A sense of shame about being Iranian and seeking a less negative way to portray self. In that case the use could be considered a symptom of an inferiority complex.
Please keep in mind that after the few minutes it takes to answer the question "where are you from?" with the word "Persian" followed by a long explanation, any westerner would finally reach the conclusion that "oh, so you're Iranian, why didn't you just say so". Granted, no one actually says that out loud, maybe that's why many Iranians continue to repeat these long statements of introduction.

2. A sense of superiority based on race (aryan supremacy) which would unequivocally qualify as racisim and fascism by western standards. I am aware that in Iran it would not qualify as either.
The Western audience of a "persian" defining himself or herself, as superior, I mean special, due to their vast cultural heritage and history may be nodding politely, but all along knowing that there is a supremecist/racist notion being conveyed.

I hope this clarifies, a little, where "we guys" are coming from on this issue, no pun intended.

Thank you Paul!
I aim to please:)

Where is your "analysis" NOW?