Opportunities and challenges for a region in flux
By Mark Pyruz

Chairman of the Joint Chiefs of Staff of Iran's Armed Forces Major General Hassan Firouzabadi said that the Islamic republic is ready to expand its military and security cooperation with Iraq, the local satellite Press TV reported on Monday.

He said that the withdrawal of foreign troops from Iraq was the result of determination and resistance of the Iraqi nation and government.

"We hope the United States has learned a lesson from its nine- year occupation and humiliating defeat in Iraq and never thinks about attacking another country," he was quoted as saying.

Iraq is facing some security challenges and needs to exchange views with Iran, which is strong in many areas including security, said Zebari.

Iran has said that the only path to the establishment of peace and security in the region is the cooperation of regional countries, without foreigners' intervention.

There is a false narrative circulated amongst certain elements of the U.S. military, punditry and media that USA General Petraeus and the so-called "surge" led to the significant reduction of violence in Iraq in the late 00s. In reality it was largely the work of an Iranian General: IRGC-QF Commander Maj. Gen. Qassem Suleimani. It was Suleimani that helped enable the Shia conquest of Baghdad (occurring to a large extent before the introduction of the U.S. military reinforcement) and it was Suleimani that brokered the truce between the Iraq Army and Shia militias. 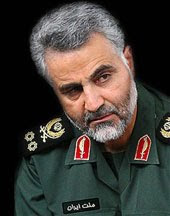 IRGC-QF Commander Maj. Gen. Suleimani
It has been speculated by objective Middle East regional observers that without the soft power capabilities of the Islamic Republic of Iran, the government of Iraq would have more resembled that of the Palestinian Authority and the pliable leadership of Abu Mazen (Mahmoud Abbas). Instead, the Iraqis could rely on the offsetting leverage provided by Iran, which was key to Iraq successfully ejecting the U.S. military from its territory. Seen in this light, Maj. Gen. Firouzabadi's remarks can be interpreted as something of a verbal "victory lap" for the Iranians.

It's interesting that Iraq Army Chief of Staff Lieutenant General Babakir Zebari had previously in 2010 voiced concern that his military was not ready for the security challenges posed by a U.S. military withdrawal. It appears Iraq's civilian leadership may be directing him to more closely cooperate with the military-security establishment of Iran. This is likely all the more significant as Iraq Prime Minister Maliki engages in efforts to rollback Sunni political power, such as it is, currently manifesting itself in the arrest warrant of Vice President Tareq al-Hashemi.

The removal of U.S. military forces in Iraq and Iran's pivotal relationship with Iraq now afford Iran with the opportunity of a direct, overland line of communication extending clear across to the Mediterranean Sea, something not fully realized since Sassanid times. Within this context, it is easy to see why NATO is currently engaged in efforts to dislodge President Assad in Syria, not the least reason being to block Iran's greater projection toward this western direction.
Perhaps the American neoconservatives were partly right after all, when during the run-up to the Iraq War they declared "the road to Jerusalem runs through Baghdad." The part they may have gotten wrong, however, is the effective course of that road's direction.
Posted by Mark Pyruz at 1:29 PM

I am looking for a speech recently made by Gen. Suleimani , it was broadcasted on IRIB but I am unable to find it on YouTube maybe Farsi speakers or the Uskowi crew can help me out.

Who are these so called, "objective Middle East regional observers" that you quote? You haven't been to Iraq and it certainly doesn't appear that you are a serious student of history, so I think you owe the readers of this blog where you get your outlandish statement that the Qods Force helped stabilize Iraq? He, Iran and the Iraqi Shia will reap a bitter harvest of what he sowed.

May Iran-Iraq ties particularly, militarily, will open a very interesting new chapter in this millenium. May the 'Creator' bless both of them, also!

Iran should stay out of Arab affairs and sort its own problems out first.