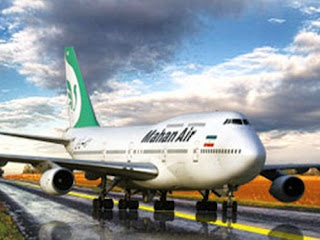 The Treasury also charged the airliner with ferrying personnel between Iran and Syria for military training and helping IRGC-QF officers to covertly travel abroad. The airliner’s crews were also accused of shipping arms on behalf of Iran and Hezbollah.

On Sunday, the International Air Transport Association (IATA) suspended the Iranian national airline, Iran Air, after the Treasury’s OFAC had added it to its SDN list. IATA is expected to also suspend Mahan Air after Wednesday’s action by the Treasury. The suspension would prohibit Mahan to use other airlines' facilities and non-Iranian travel agents would not be able to book passengers on its flights. Such restrictions, if implemented by IATA, would severely limit Mahan Air’s ability to service its foreign destinations. Mahan Air is Iran’s most modern and fastest growing airline.

wow! that will really "scare" the Iranians. Just shows how impotent and weak the US bullying tactics have become. A lot of desperation and the fantasy plot also sheds a light on US juvenile policies which are now the laughing stock of the world.

the world got together at the UN to laugh at the US not too long ago and passed another round of sanctions.

then the EU got together to laugh at the US and passed some more sanctions on top of that.

then the the International Air Transport Association got together to laugh at the uS and decided that the planes aren't going to go anywhere.


kinda funny how things are going

It will be interesting to see how the IATA suspension goes for these airlines, and how the Iranian airlines attempt to improvise beyond its affect.

Totally agree! It's funny how these mullah boys twist things around and make out that the US is the laughing stock of the world.

The best, most rational, explanation for this event is that some anti-Iran element in Iran orchestrated this to make Iran look bad.

It's a sad state of affairs when anyone with $100,000 in Iran - probably some MKO agent in Iran - could cause so much trouble.

wow, The US must be desperate.. as if it hurts Iran lool

What makes you think the MKO operates from Iran why not anywhere but Iran?
Or possibly this could have been an intelligence cock up by the IRGC even the CIA does that.

"The best most rational explanation for this event is that some anti-Iran element in Iran orchestrated this to make Iran look bad."

For once you could be right but look no further than the demonic regime itself that is in Tehran for a more rational answer instead of the MKO which is a washed out organization with no real support within Iran.
Besides the stupid regime made Iran "look bad" from the day they stormed the US embassy and took dozens of hostages for 444 days.
Get real pal!

Wasn't Mahan Air the one that displayed Arab Gulf instead of Persian Gulf on their inflight monitors whilst traveling to the UAE?

I rather travel by horse than use Mahan Air.

Iran Air is finished due to incompetence by the mullahs and their thieving merry men.

Who knows they might start an Airline pretty soon called Mullah Air.

All with their specially made airports and imported fuel supply in foreign countries and then they can boast about how independent they are.

What a bunch of sad and incompetent losers.