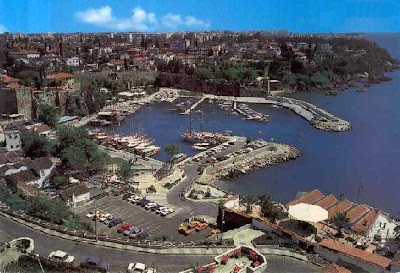 More than a million Iranians visit Turkey each year; most of them flock to Turkish Mediterranean resort town of Antalya. The Financial Times in a report from Tehran discusses Iranian obsession to visit Antalya. Such is the enthusiasm that hardliners in parliament have vowed to restrict the travel agencies' promotion of overseas tourist attractions.

"They [Iran's rulers] think if we do not mention the name of Antalya, people won't go. But the fact is that lots of people want to go [to Antalya] ," says a travel agent in Tehran who promotes Mediterranean packages [Financial Times, 30 July].

The Antalya resorts offer lively nightlife and access to mixed beaches that are denied to Iranians at home. Moreover, Antalya hotels generally offer better levels of service and cheaper prices than the resorts in Iran’s Caspian Sea and Kish Island. A one-week package to Antalya including flights and full-board ranges from $500 to $1,000 a person. A standard two-bed room in a top hotel in one of Caspian resorts, complete with social restrictions, costs about $200 per night. The figure for a similar room on the Gulf island of Kish in the south, is usually more than $150.

"A one-week tour package to Thailand or Malaysia or Turkey is cheaper than the same package to Kish — and the levels of service are much higher," says Mustafa Shafe'ei Shakib, a member of the Iranian Travel Agencies Guild Association.

Banned singers and dancers, most of whom live abroad, also flock to destinations popular with Iranians. Googoosh, a legendary pop singer, and Mohammad Khordadian, a renowned classical dancer, are performing in Antalya this week to sold-out crowds of visiting Iranians.

Local travel agents believe that out of the six million trips taken by Iranians overseas each year, more than one million people go to Turkey for a holiday or for shopping — or both. The figure is not much below that for the combined number of Iranian pilgrims visiting shrines in Saudi Arabia, Syria and Iraq.

Boycot Dubai and thou shalt be blessed

Dubai is the second most popular destination for Iranian tourists after Antalya. Malaysia and Thailand are in third and fourth position respectively.

That is evidence thar iranian become richer rather than poorer.

Te Iran Eonomy should not going to bad

Anon August 1 7:54 No this is evidence that the Iranian people are sick and tired of this fascist regime so they leave their country so that they can holiday like a normal human being.Iran has wonderful Caspian sea with views that knock spots off Turkey yet because our country is governed by subhumans like IRGC,BASIJ and other oppressors with knives and chains our people run to Turkey and spend their hard earned money there.Economy what economy?Have you heard about our currency lately ??

Millions of europeans slock to turkey and egypt because they are sick and tired of their own
and the likes of you.

maybe the people are tired of fascist regime
but they have also alot of money for spend to go to Antalya, Thailand, Malaysia,Dubai for vacation.
by the way he small caspean see is nothing against Turk miditerean rivera.
The por people go to csapean see
the richer to Antalya

Great news, I think that in the near future Lebanon and Azerbaijan will recieve higher numbers of Iranians wanting to party the night away. They could meet up with the British on Aiaya Napa too.

Anon August 1 2:13 The Caspian sea use to be like the Rivera long before Antalya that is until the subhumans turned the whole country into a public toilet.Until we get our country back all Iranians will remain poor except the fat dirty mullahs.

In a few more years the leaders will not allow people to leave the country for holiday........you shall see.

Yes pretty soon Iran will become like North Korea and the only place people allowed to visit will be Qom,Mashed and Khomeini tomb praising him for turning our country into one big god forsaken rotten concentration camp.Yes the likes of me who served my country who lost a brother and many dear friends in the Iran Iraq war has to put up with spoiled little ignorant and illiterate little X BOX generation brats of the regime so that they can have a good life in the west while our people are scrimping and scraping for daily life.

Actually, I think what will happen in a few years is war between Iran and Israel -- and you will have to choose your alliegance.

You mean allegiance which of course is and has always been Iran.But unfortunately for some people on this site there will be no war between Iran and Israel hate to disappoint you.War is not a game you play on the computer its dirty very dirty but never the less events can only be brighter in the future specially Iran.

It seems to be great reading these stories on summer fun filled activities. I had to share the ones we had last year. We went to a surf camp in australia and had a great time.