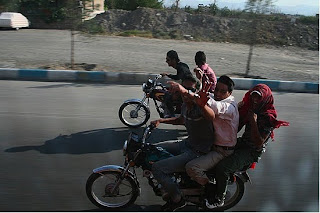 
If it can be called that, "drivers" in Iran have adapted their own rules of driving in this country. At first as an outsider, you are hit with utter shock and astonishment at how cars in Iran get around town. Sitting in a taxi and navigating Iran's streets, you feel that at any moment you will hit another car on the road. Surprisingly, driving in the city, restricted from speeding due to traffic, accidents are not more than one would expect anywhere. Where Iran really sets itself apart from the world is on its highways. Iran has one of the highest accident rates and deaths per capita in the world, over 30,000 a year.

Rules of the road

On paper the rules of the road are as they are anywhere else in the world but as Iranians like to do, they go their own path! For example, driving backwards in a one-way road is acceptable if you need to get to a side road. After 12 o'clock PM, traffic lights become a recommendation and not a must. Driving through an intersection that is somewhat lighter on traffic, it is customary that one honks the horn to let another car coming that, "I am driving through so watch out!". Road lanes are seen more as a helpful hint and if traffic gets heavy, "drivers" will instantly add 1-2 additional lanes to the average 2-3 lane road. Yellow is seen as go versus a green traffic light.

The most important tool in a car in Iran, is not its brake, lights, side mirrors, but its horn. I have heard OFTEN, "I can't drive today, my horn is broken!" It is used constantly and everywhere and with no mercy! You use it to signal an approaching car or person that you are getting too close for my comfort. Don't ever upset a driver by pulling quickly in front of them, because as some like to do, they will express their anger in a 30 second long honk fest. Honking is also not always seen as a negative thing; shared taxi drivers (see my last article if you missed this) are prolific users as they honk at people on the side of the road to signal for them to scream out their destination. If it agrees with their route they will honk again to signal, get in. Cars carrying around a wedding couple will also elicit the "songs of the horn" from its convoy. As each driver passes by the slow moving convey of wedding cars, they will express their congratulations by honking a few times. In the past, cars waiting at a traffic light would honk in their boredom of waiting and a few years ago traffic police added timers showing time left to a green light and this has calmed these bored drives.

Iran's liaise faire policy on its roads and lack of coordinated management are allowing Iran's "drivers" to continue with their reckless traveling. A traffic official standing on the road usually applies fines in a pre-set list of violations, like drivers not buckling or accidents. Whereas they need to apply the full law and give out fines for every violation this is not done. Additionally, there are only random crack downs that last for a short while and then things go back to the way they were. For example, outside of Tehran helmets for motorcycles are only randomly enforced with areas set up and confiscation done of the bikes of offenders. After a few days, things go back to normal and "drivers" again avoid the hassle of wearing a helmet. Violation fees are still too low to deter bad driving. Whereas fines have recently gone up and for example, speeding has increased to as much as $200, other violations are still too low to encourage better driving. Switzerland has an innovative method of fining. It applies a fine based on ones yearly income and around a year ago gave out the world's highest speeding fine over $200,000 to a high-earner. In Iran, a large group are driving imported cars that cost them over 40,000-50,000 dollars. These individuals are not deterred by a $20 parking violation or $200 possible maximum speeding fine.

So what is being done

In cities there are a ridiculous amount of speed bumps to reduced speeds. Traffic police stand in most busy intersections either directing traffic at busy times or giving out fines. Iran has a huge fleet of tow trucks, and removes unwanted parkers at one of the highest speeds I have ever seen anywhere. These traffic towing fleet roam the roads and when spotting a parking violation, not that hard to do, they quickly swoop in and remove them. I have also even seen special cranes that remove cars that are tightly packed in-between other cars and are simply lifted up and onto the back of a heavy truck, as if it were a toy car. Many of Iran's highways are setting up camera speed detectors. A point system has been set up with increased points meaning the loss of your drivers license. In an education program on television, smart animation cartoons with 2 famous characters show wrong driving methods and often the right way. These are done with high quality and humor to grab the viewers attention and influence children. Fines have been recently increased heavily to further motivate good driving (still to low in my opinion). These steps are good and in the right direction but our officials need to use a much heavier hand in enforcing the law. There must be a constant push to keep drivers sticking to THE official rules of the road. Switzerland's approach is also not a bad idea to deter those wealthy enough to brush off a fine driving down Iran's roads with $250,000+ cars.


Editor’s Note: Amir Taheri is one of the authors of Uskowi on Iran. His weekly columns appear here on Fridays.

Photo courtesy of Travelpod
Posted by Amir Taheri at 2:12 AM

Iran's drivers have a "don't give a damn" approach to driving. As long as the car's moving forward, anything in front or behind is secondary.Honk all the way!!!!

Can't wait to see some trolls come out to call Amir's recent piece "regime apologist". Some people just can't stand facts and will rather Amir write Iran "booga-booga-eek-eek" stories based on US state department's script.

wonderful..try Paris... after a week stay seriously away from guns !

Really good n funny article:) and soooooooo true...theran was soooo terrible,..lol...and the drivers dontgive a damn anout the rules...for example the taxi driver to the airport... He was so proud to show me that he drove over the speed limit...lol...They hav still soooo much to learn....

Thanks all for your comments! What I left out was that I had written a letter to the officals asking them to designate a day where, nationwide, all rules are applied and requests made out that all try to adhere to good driving methods. My theory is that if the population were to witness how smoother things would go and see the benefits, they would themselves in the future obey the rules more. I think the general problem we have now in Iran is that everyone says, "why should I change, everyone else still drives like madmen". If we destroy this thought than we can see an improvement in our crazy driving culture!

What are the posted speed limits on the main highways and roads through town?

Driving in Iran is terrible, and evidence that Iranians are nihilists who do not believe in following the rules.

come on guys, it's not about drivers, it's alla about 'amuzeshi ranendegi'... these people are teaching the young drivers in wrong way. they don't have any idea about defensive driving and so on.... let them die in order to be less...only grave can put them on right side of the track....

It shows how civilised the people in Iran are. Be more proud of the 2500 years of "persian civilisation" and throw it in the face of "everyone" when you debate iran!

with all respect Mr Taheri, YOUR ARTICLES is lacking a balanced view of Iranian driving habits, for example you would have shown some insights on conditions of the roads in IRAN and the government effort on the issues you raised.In Kenya during the tenure of Mr Michuki as transport minister HE introduced the michuki rules ,the country experienced a revolution ! accidents rateS dropped drastically.

After 2500 years of civilisation this nation:

1) Has little or no respect for law and order
2) No consideration for fellow citizens. What matters is me not anyone else
3) Driving is small part of it. Waiting in the queue, respect for environment etc is unheard of.
4) After 2500 years you still see prople emptying their bin into open sewage running on the side of the streets. Yes they do live in the same place.

I do not think this has anything to do with Islamic Republic or state department (as a bozo implied) or anything else. It is simple cultural backwardness (farhang agabmandeh).

Mr Uskowi likes to talk about freedom and democracy. If you have no respect for other people and their opinion and show tolerance, how can this nation be democratic!.

Anon. july 24 2.20 pm
You are absolutely right. I am sure we will be jumped at vey soon for being anti Iranian and anti Iran on this website. However a nation who can not see their own faults and shortcommings will never improve its future.
On my trips to Iran I have on every single occasion seen a total lack of respect for other people's right and wellbeing. From the moment you set foot in the airport you will see this uncivilised behaviour and it continues on the airplane and everwhere else. The Iranians are extremley quick to throw "the 2500 years of culture and history" in the face of each oter and foreigners. You ask a very interesting question. Iran will never be a democratic country as long as the people are looking for a "stong man" or a Supreme leader. The monarchist had the "Reza Shah" and the Shah. Mojahedin khalgh were (and are) ready to kill and burn themselves for Masoud and Maryam Rajavi (Imagine what they would do to their opponents) and the Islamist Khomeini and the current supreme leader. Iranians have always encouraged dictators/ dictatorship and a personal cult instead of political parties and institutions. So until this changes, there is no hope for real democracy in Iran.

Some research has been done on Iranian's driving habits. One piece of research, for example, analyses Iranians' driving as a reflection of culture, law and the development of state in Iran. You find this study at: