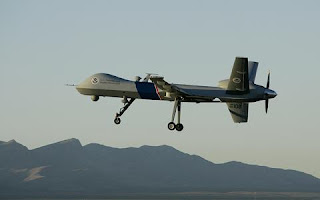 The Iranian state-run media is reporting that Iran military has shot down an unmanned US drone over the country’s new Fordo uranium enrichment facility. Javanoline.ir and Press TV have quoted a member of National Security and Foreign Policy Committee of the Iranian Majlis (Parliament) as saying that IRGC's Air Defense units brought down the spy drone over Fordo. There has been no confirmation of the incident by either the US military or the CIA. The IRGC also has not produced any photos of the downed aircraft.

Fordo is built next to a military complex near the central city of Qom. Its existence was disclosed by Western intelligence agencies in 2009. Only yesterday Iran had announced that a new generation of centrifuges was being installed at one of its uranium enrichment facilities. Iran maintains two such facilities, at Fordo and Natanz. The new centrifuges, with higher quality and speed, could have been installed at Fordo.

UPDATE: Voice of America (VOA), the official external broadcasting service of the US government, reported today that senior intelligence and military officials in the US have denied the report that Iranian forces have shot down one of its drones [VOA Persian, 20 July].

AP File Photo: MQ-1 Predator, an unmanned aerial vehicle (UAV), commonly referred to as a drone, used by the U.S. Air Force and the CIA. The Predator carries cameras and other sensors and can carry Hellfire missiles and other munitions.

I've been waiting for corroborating photo/video evidence to be provided in support of this claim.

Highly curious is the PressTV claim it was shot down by a Saegeh fighter (in my estimation, a flight demonstration type) and involving an Iran-40 (do they mean IrAn-140?).

And aren't Saegeh type aircraft based at Mehrabad?

Press TV Does not claim that. One of the 100's of the commentators in the comments section claim that!Link: http://www.presstv.ir/detail/189873.html
A very unlikely scenario involving IrAn-140 and an F-5. IRIAF F-14 have been known several years ago involved with UAV shoot downs and most likely platform to use.

question is that what type of uav was it and how could uav enter in the heart of iran if you look on the map of iran four possible way to ineter in iran air space from north is the shortest way from south persian gulf area and south west and south east from iraq to afghanistan to saudi arabia is at least from 1000km to shortest 375 km in side iran how could be iran radar defence did not see the air craft? how let them inter inside and what kind of uav was it? what type of jaming system had not to been seen? is iran air defence system is still week many question would be rise up?

I don't like the fact that these drones came so deep into Iran..

I thought Iran had new Radar systems .. does anyone (serious) has any idea.

1. How come this drone was allowed to penetrate so deep inside Iranian territory before it was detected and shot down? This is quite worrying, considering that the latest American long range bombers are also radar evading. I thought Ghadir Rardar was supposed to detect targets of this nature?

2. Can Iran realistically file a complaint with the United Nations on violation of its airspace?

Iran has already complained to UN several years ago about the UAV's entering Iranian air space, but nothing ever came out of those complaints.

When pondering if this report is indeed accurate the first thought that came to mind was the 1960 U-2 spy plane incident, in this case however the Iranians will be unable to produce a Gary Powers so to say to irrefutably prove their claim to the US contrary.

@Anon 7:42 PM
As for Iranian complaints to the UN for air space violations look at Lebanon, the Israeli Air Force has on hundreds of occasions in recent years made incursions into Lebanon's air space, the Lebanese government were even until recently seriously considering buying 12 MiG-29 Fulcrums off of Russia.

before anyone gets too upset about how an American drone got all the way to Fordo,( and it should be an eye-opener) let's wait until the iranians show some proof of their claim.

last anon, The biggest liers are in Washington and Israel.. them folks have their match

There's no doubt that there are big lars in DC and many other places, but that doesn't renders the Iranian regime any more truthful than they are...

They regularly make claims about their military abilities and achievements that are so wildly inflated as to be laughable.

The truth of the matter in this case is that either a US was all the way to Fordo
or
they just made up the entire thing about shooting one down
or
they shot down a child's kite or maybe one of their own aircraft practicing for a moon landing.

Iran does not have a regime like the saudi or other satelite states.. Iran has a Govt... bloody hard enough to establish it..

sorry its not to your taste.. but it is to the majority of Iranians inside Iran.

and I suggest you correct your prejudical opinions then we shall discuss further .

@anon
I don't like the fact that these drones came so deep into Iran..


Why would Iran tell the exact coordinates or location? I think the drone was engaged but allowed to proceed until it was too close to some important military/industrial complex. I think Iran did the right thing by lying after all everyone does it!

Uran's govt is abusive, lost what little legitimacy it had when it rigged Ahmadinejad's re-election, and if I am repulsed against a theocratic regime, that's not anything that I feel the need to change.

It's not at all a prejudiced view. I didn't simple decide that I hate it. I looked at what it does and has done before rejecting it.

Women sentenced to execution by stoning and condemned for adultery, people's families arrested as a tool of political coercion, and a man sentenced to death for APOSTASY are things that I don't with upon the Iranian people.

The people of the nation did have a heck of a struggle overturning the monarchy and they deserve better than what is now in place.

My hope is that they're able to secure better...and that thought is also something that I don't wish to change

If you find that my ideas, my "prejudices" render me unfit to discuss things with you, that's your choice.

Either way, be well and happy.

Bush rigged elections in the USA.

Irans case was an attempted "Operation Ajax 2" which failed.

Now go get a life... you are not my countryman.

Sorry, but Bush didn't rig elections in the USA

there was nothing about the rigging of the last Iranian election that is attributable to anyone but the guys who decided to rig the election...Not the US, but the Iranian regime.

Now, get a fact...you're blowing the thin smoke of mendacious conspiracy to try to draw the eye away from the steaming pile of offal around your ankles.

Step back, take a look at it, and move on from it.

Bush rigged and its on the record.

popular vote was won by the other guy.

Moussavi lost by a margin of 2 to 3

everybody in Iran knows this thats why as soon as you guys started the drums everybody stopped protesting, cause noone wanted another 1953

2) popular vote isn't exactly how the winner is determined in a presidential election under the US federal system. Never has been.
Unfortunately, from my POV, the Bush ticket won the vote in 30 of the 50 states.