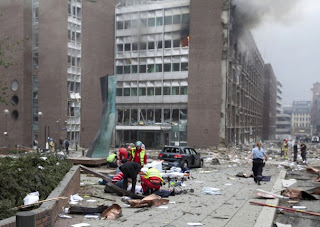 Two apparently coordinated terrorist attacks hit Norway on Friday, killing 91 people and injuring scores of others. At least 84 young Norwegians attending a Labor Party youth political conference outside Oslo were mascaraed by terrorists dressed in police uniform and an explosion in Oslo city center and the seat of the government killed at least seven more people and severely damaged buildings, including the prime minister’s office building. The premier was not in the building at the time of the explosion and was scheduled to address the youth conference later that day.

A Norwegian citizen with apparently strong ties to a right-wing Christian fundamentalist group was arrested at the crime scene in a holiday island near Oslo that was the site of the youth political conference. Eyewitnesses say that the suspect wore police uniform and used many heavy automatic weapons and ammunitions to shoot the youths indiscriminately. Some of the youths were drowned while trying to escape the island.

The attacks were the largest on Norwegian soil since World War II. They showed that the ugly face of terrorism come in different colors, nationalities, religions and political beliefs. Uskowi on Iran extends its deepest condolences to the peace-loving Norwegian people who lost so many during these tragic events.
Photo: The aftermath of the explosion at government headquarters in Oslo. Friday, 22 July 2011. WashPost.com.
Posted by Nader Uskowi at 6:40 AM

My brother works in Oslo, he rang home ten minutes after the initial explosion there to tell us what he had heard!

It is amazing how fast the headlines and coverage of this event changed as soon as it was clear an ethnic Norwegean was responsible.

No more talk of Terrorism.... it was suddenly a crazy act of massacre.

Reminds me of Newspaper reports of Murder in west... when a middle eastern man kills his wife, its "honor kiling"... exactly the same circumstance & act by an ethnic man.. its called family tragedy.

Poor Iran that has to cope with such disgusting hypocracy.

They killed a young student/scientist in Tehran again.

I don't understand the reason for keeping the UK embassy open in Tehran.

Killers come from there and go there.. They are the Mossad logoistics.

Nuclear people in Iran are not to be found and thats why they kill any teacher they get their hands on now.

Why are the "peace-loving Norwegian people" in Afghanistan and Libya?

Zionist agenda of perpetual hatemongering and Islamophobia at work. It is indeed interesting that the Zionist controlled "western media" immediately downplayed this mass act of terror as soon as it became apparent that it was committed by Christian-Zionist "evangelical" terrorists.

However, the UK Zionist gutter press of Rupert Murdoch could not resist blaming this mass act of Christian terror on "alCIAda". The double standards and racism of western media is beyond disgrace.

RIP to all the innocent victims of Islamophobia.