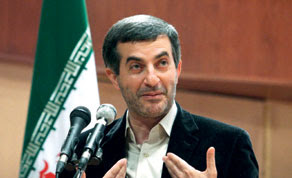 Iranian President Mahmoud Ahmadinejad on Saturday dismissed his controversial chief of staff Esfandiar Rahim Mashaie. The surprise development came after months of concerted attacks on Mashaie by senior clerics and the hardliners. Mashaie promoted the concept of an Iranian school of Islam as the ideological underpinning of a new Islamic Republic, coopting Iranian nationalism to transform itself beyond its narrow appeal to religious feelings of the population. He was expected to run for presidency in 2013 after Ahmadinejad’s second term ends. The hardliners had other ideas and it appears they could finally get Khamenei’s support to dump him.

Ahmadinejad appointed Hamid Baghaie, a close aide and director of Cultural Heritage, Handicrafts and Tourism Organization, to replace Mashaie as his chief of staff. Mashaie would still hold other government posts, but it was his role as the chief of staff and Admadinajad’s top operative that gave him the platform and the exposure he used so effectively to make headlines.

These are tactical reshufflings.

Friendships are usually not compromised, and the word "firing" raises silly hopes of regime discord amongst even more stupid royalists/MKO supporters outside of Iran.

The better title would have been "replaced". But I still like you very much Nader :) despite of your occasional passionate textology.

Bless you and Bless Iran.

I believe in this particular case, there was indeed a fierce power struggle going on. The senior clergy and the hardliners were seriously opposed to Mashaie and his platform for reforming the political landscape in Iran, broadening its appeals in the long run above and beyond its religious roots. The headline probably should have read ‘Ahmadinejad Was Forced to Fire Mashaie!’

And thanks for your compliments and your readership.

The above comment was meant for Anon 4:06 AM, sorry.

Maybe this is so that he can start running for President?

Mashaie was an embarassment with his nonsensical statements which did on relate to Ahmadinejad's policies or the mainstream views of Iranian political establishment or public sentiments. This was long overdue.

Who says that the mainstream views of Iranian political establishment are the same as the public sentiments?

Ahmadinejad goes against the political establishment all the time.

dont hype it... u will be disappointed again