"The peacekeeping unit of the Army Ground Force is waiting for the relevant orders (by the UN) to be dispatched to the countries specified by the UN," Commander of the Iranian Army Ground Force Brigadier General Ahmad Reza Pourdastan told reporters on the sidelines of a meeting with a number of foreign military attachés in Tehran on Tuesday night.

Stressing that Iran, like any other country, has formed a peacekeeping unit which enjoys a highly integrated structure, he stated that the Army's peacekeeping unit will be dispatched to the places and countries announced by the UN as soon as the Iranian foreign ministry communicates the relevant orders to the Army. 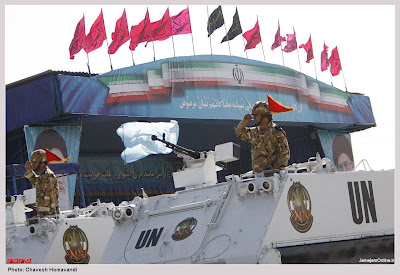 For the second year in a row on the occasion of Military Day in Tehran, Iran has paraded a pair of M113 APCs specially marked and painted in UN peacekeeping colors.
Photo: Chavosh Homavandi at JameJam Online
Posted by Mark Pyruz at 2:10 PM

is he serious- this is too funny!

(FARS News Agency) Supreme Leader Urges Army to Activate All Potentials, USE ALL CAPACITiES. Is this the Iranian version of "all options are now on the table?"

Actually four M113 APCs with UN markings were paraded. The same as is true for the last year, but with the difference that they additionally put the emblem of the Army on them in this year.

Next, they will ask the UN to send their peacekeeping troops to Gaza. You know, peacekeeping UN troops between the Gazans and the Zionist entity. They are so transparent, so anxious to cause trouble, that it is pathetically sad.

LOL.... And infiltrate their terrorists in the war zone too?