The system has been tested recently and will be unveiled in the near future, Fars News Agency reported Saturday.

The Sayyad-2 is an upgraded version of the Sayyad-1 system with higher precision, range and defensive power.

The Sayyad-1 missile defense system is comprised of two-stage missiles that can target all kinds of aircraft, including bombers, at medium and high altitudes.

It is also equipped with a 200-kilogram warhead and has a speed of 1,200 meters per second.

The Sayyad-1 anti-aircraft missile system can be used in electronic warfare and against low radar cross-section (RCS) systems.

The Sayyad-2 static surface-to-air missile system is a further development of the Sayyad-1 series, which in itself is a development of the Russian S-75 (NATO SA-2 Guideline) system. The Sayyad series is also heavily influenced by the Chinese HQ-2 and may benefit from North Korean technology input. Other reports not yet confirmed suggest the updated Sayyad series to be strongly influenced by HAWK and Standard missiles in current IRIADF inventory. 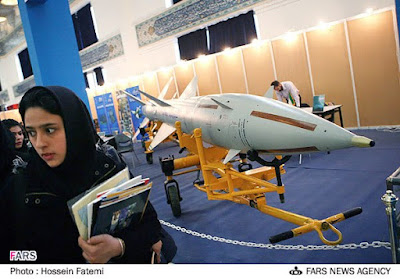 A student passes a Sayyad display at the 2009 Arms Expo in Tehran
File photo: Hossein Fatemi at Fars News Agency
Posted by Mark Pyruz at 12:09 PM

Syrian protests are magnified into something which is not by western media.

Saudi Arabian and Bahrain are the 2 countries to be worried about.

What they did was equal to what Saddam did, Shia never forgets and they know it, so they are gonna have to die on their thrown.

Syria is nothing dude. Saudi and Bahrain is falling. in a year or 2 ... they shall be caught off guard and their pants pulled down.

North-Korean technology input? I do not think so. It has rather Chinese input only. NK is not able to give Iran any further technology input. they are rather dependend on Chinese or Iranian input.
The question is, how usefull are those "new" missiles since China is going to phase them out for the HQ-9. I would have been surprised if Iran presented anything similar to S-300 or HQ-9.

The HQ-9 or FT-2000, uses an upgraded version of HQ-2 missiles. Therefore, I feel that local industrial level production of Iranian HQ-9 type SAM may be underway.

There's a lot of speculation going into reviewing these communiques.