Netanyahu: "Within three to five years, we can assume that Iran will...produce a nuclear bomb." 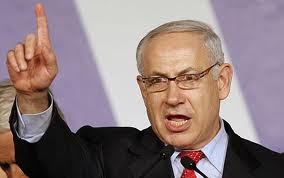 An article from 1995 reveals that Benjamin Netanyahu stated that Iran would be in possession of nuclear weapons by around 2000:

"Within three to five years, we can assume that Iran will become autonomous in its ability to develop and produce a nuclear bomb, without having to import either the technology or the material.

[The nuclear threat] must be uprooted by an international front headed by the US. It necessitates economic sanctions on Iran."

Some things never change!
Posted by Paul Iddon at 10:55 AM

Gulliable Americans are known for their short memories!

There is a line from "The Wire" in which one of the detectives says something like "Americans are an stupid people, we pretty much believe whatever we are told."

Iran... what's taking you so long. You should have been finished 15 years ago, your making us look like fools.

The reason that Iran did not get a nuclear weapon in that timeframe is because of action taken by the US and Russia to deny them the necessary infrastructure technology. Remember that Bushehr project was begun in in 1975, by Germans, who were forced to stop after 1979 revolution. It was taken over by Russians in 1995, which precipitates Netanyahu's comment. But then the Russians were stopped too. Not to mention the hundred of trade interdictions to stop basic technology and yellowcake shipments, and who knows what other clandestine efforts by US from 1995 to now. In the meantime, they have developed their own indigenous capabilities. Netanyahu was right in 1995 - Iran could have had a nuclear weapon in 3-5 years - but his message was heeded by the West, and Iran was stopped, or at least severely slowed down until the present day, by a concerted effort by the West.

In theory Iran could slap together an A-Bomb this year with their low enriched U-235- Approx 400 kg required, Iran has about 31.5 kg in stock and could produce around 1000 kg in a year.

The bomb would be large (bigger than the 'Fat Man' bomb), and very inefficient but capable of doing massive damage.