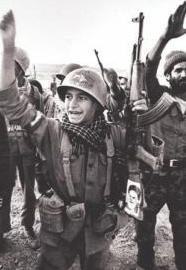 On this day 30 years ago Iraq launched a simultaneous invasion by air and land into Iranian territory.

Believing the Iranian Military was in disarray Saddam Hussein launched the invasion in an attempt to take control the oil rich Khūzestān region and to quell the Khoemini's Islamic Revolution from spreading to the Shia majority in Iraq.

Over 70,000 Iraqi soldiers entered Iran, they would not be pushed back until 1982 following the intense and bloody fighting at the town of Khorramshahr, the war would then pick up again as a large scale border war with an Iranian offensive, that eventually ended in a ceasefire in 1988 with a million people dead.
Posted by Paul Iddon at 4:15 PM

Email ThisBlogThis!Share to TwitterShare to FacebookShare to Pinterest
Labels: anniversary

Nice of you to commemorate this tragic event in middle eastern history. As tragic this was for the Iranians, it was tragic for Iraqis and the arab and muslim world.
Instead of countries in the region working together for prosperity, advancement and development, they fell into the trap of working against the interest of the region to serve those of foreign powers.

As an arab, I can never forgive the Arab regimes that were behind this war. The regimes that saw in Iran an enemy worth fighting, while they neglected palestine. If only this war was avoided, the region could have been spared so much suffering.

Hopefully now we can learn from this and move forward to better our region for our own benefits.

May every lost Iranian soul in this war be blessed.

This generation did its duty well in preserving Iran and now handing Iran to the next. I hope they are as brave and selfless as the previous.

well said mr or mrs illuminati I very much appreciate your points of view.