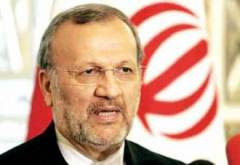 The Egyptian government today cancelled a scheduled visit to Cairo by Iranian Foreign Minister Manouchehr Mottaki. The move was made after Mottaki harshly criticized the US-sponsored peace talks between the Palestinian and Israeli leaders underway in Washington, calling the Palestinian leader a “traitor.” Mottaki was to attend a meeting of non-aligned nations in Cairo.

It's Iranian positions such as this one that have garnered the support of Arab masses in North Africa and the Middle East.

These guys shouldn't be elevated to the state of traitors as it implies they had a belief to betray.

They are simply corrupt stooges. Egypt meanwhile actually harms it's own country to please Israel. Even if you don't support the Palestinians at all, it's astounding to see a country so blatantly thwart it's own national interest.

But as an Arab I can tell you that we're used to our leaders going against our own interests!

And what exactly will the oppressed Arab masses do for us when US and Israel come for us?

Look at Mubarak's bank account to see what this gesture was worth! Like when the countries agreed to the latest round of sanctions USA's debt grew by $32B in May-June, you see the economy of the USA is not for its citizens its for the manipulation of the Zionists!

It is very interesting that all comments imply that the cancellation of Mottaki's visit was not a big deal, au contraire it was best thing that could have happened, considering the corrupt nature of the leadership in Egypt and Palestine. If this is correct analysis, then would the commentators tell us why Mottaki was planning to visit Cairo in the first place!

Have you been to Egypt recently ?.. Egypt is like Iran of the late 70.'s... bein kept together by fear and prisons and torture and sodomy

How do you conclude that because I stated that the Egyptian/Palestinian leaders are corrupt stooges means the visit cancellation isn't a big deal?

It's actually quite significant because it further demonstrates to the Arab street the disconnection from reality these regimes suffer when they try to politically punish the Iranian diplomat fir saying what we're all thinking.

As for Iran wishing to attend the visit or have ties with countries it isn't 100% in agreement with well this is a normal part of a sensible approach to diplomacy. Also there was a major conference in the offing.

I'm quite disappointed that someone like yourself, who I presumed espoused the principles of democracy and human rights would indicate any support for these two bogus, dictatorial regimes!

What part of my writing gave you the impression that I support the dictatorial regimes? Appreciate your comment.

I agree with you that a visit to Egypt is and should be normal part of sensible approach to diplomacy, as you put it. Then, in the same token, the cancellation of the visit by one side should be regarded as problematic for Iranian diplomacy. We cannot argue with both sides of our mouths, the visit is a sensible move and part of the country’s diplomacy, but is cancellation by the host country is even better!

I was not commenting on the nature of the Egyptian regime, and I generally agree with your generalization about the nature of that regime. I was indeed in Cairo recently and have witnessed many of the facts pointed it out by you. My post was on cancellation of Mottaki’s visit by Cairo. Please see my response to Zaki above. We need to stop putting positive spins on any move the government of Iran does. If Mottaki goes to Cairo, call it positive development for Iranian diplomacy. If Mottaki’s visit is cancelled, call it a victory for Arab masses on the street. This is not analysis; it is justification of everything the government does, good and bad. The real problem with this approach is when we do need to support a correct move/policy by the government, we will not be credible

Motakki went to visit Egypt because thats the strategically symbolic movei Iran is making to show the middle east/arabs/US+ Israel that it is present in the discussion and it is relevant.As for Egypt cancellingthe visit, lets be honest- Egypt sold out arabs to Israel and US and thats why its clout has waned. Iran has stood for ideological values and people in the middle east are respecting and valueing the fact that it is standing up to the US and Israel. How many arab countries are standing up the the US and Israel? US is giving Egypt and Jordan millions of dolloars in "aid",but its basically a bribe to keep peace with Israel. Useless arab countries haven't done crap for Palestine when you think about it. What has that stupid arab league done? what has "heavyweight"Saudi arabia done? only kiss US butt for the most part and thats why Iran is now the boss of the middle east telling people how things should go and i support Iran.

yes Egypt cancelling the visit is problematic for Iran, but we all know Egypt and Iran don't even have full diplomatic relations currnetly so its not a big deal- bottom line is that in a 1 on 1, Iran is stronger and more powerful than Egypt. Arab countries have been bitching and complaining for decades but they haven't done much. actions always speak louder than words..

Thanks for your reply Mr Uskowi,

I am however puzzled that you deduced that I was attempting to put a positive spin on this.

If we agree that Iran was acting normally and sensibly in attending the Egypt conference then we can't lay the blame at Iran's feet for the cancellation of the visit.

The cancellation isn't positive at all because it shows that Egypt is still pursuing a policy that runs counter to the popular sentiment in Egypt/Arab world.

I have observed a generally sensible diplomacy towards Arab states from Iran, especially those in the gulf area. So I think Iran does deserve some credit for its pragmatic approach.

Of course some silly stories do come up such as the Persian/Arab gulf naming but on the whole Iran has take a calming, sensible.

The cancellation of the visit came after Mottaki's harsh words against the talks in Washington and Mobarak's participation. The language, especially by the senior diplomat of the country, could have been more diplomatic, still having the same meaning. But I guess the language of diplomacy is generally a foreign language for the current government in Tehran. Of course they would argue that they will win the support of Arab masses instead. Is the support of Arab masses of Iran's foreign policy anything required from the standpoint of Iran's own national interests, I think not.

By spinning positively, I meant analyzing any and every move the government does as positive. That can not be, this government is bound to make small and big mistakes in its actions and its policies, and they should be dealt with accordingly, support or oppose as to the nature of that specific policy/action. My apologies if you did not mean such approach.

Thanks much for your always thoughtful comments. the Iranian and the Arabs are brothers and sisters. A strong and free Middle East require Iranian/Arab cooperation. The Iranian government does not, or should not, have any say who rules in the Arab countries, that's the responsibility of Arab people. The government should and must normalize relations with all Arab countries, including the PA.

Thanks for your kind sentiments Mr Uskowi,

Despite some derogatory remarks I see made on this blog at times regarding Arabs, Iranians and Arabs are the people of this region so of course they should co-operate.

I think your point regarding Motaki's harsh words is a fair one but again, mature governments can have disagreements and still keep up relations. Again here I Kay the blame at Egypts corrupt dictatorship (and I say that factually rather than emotionally).

However I can't quite agree with your harsh assessment of Iran's foreign policy/diplomacy. On the whole I see it as very pragmatic. Especially compared to pro-western Arab states (e.g the official Saudi/Emerati calls for attacks in Iran).

As for the benefits accrued to Iran for voicing the popular sentiments of the Arab street, I'd see this more of a moral position that should be taken without a balancesheet of credits & debits in hand.

I agree of course that Iran should reach out to all parties, even the democratically bankrupt PA. I only wish the west would be as pragmatic in their treatment of democratic parties like Hamas and hizbullah.

If states like Iran/Turkey don't stand up and talk about the challenges that freedom face in the region, who will?

I have a feeling, people should read the comments to the end and carefully,before they attack and criticize someone

Bless Iran and all Iranians except the MKO and their supporters.