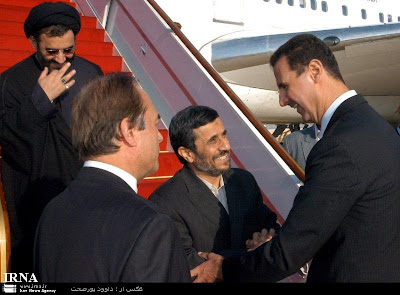 Interesting. Looks like the President is flying in a Boeing 747SP-86.

Well Mr Presidente, I for one am always glad when you visit the "crooks den" that is the UN. I bet that what you say wil be rubbished, however things are a changing and many in the world eagerly wait your pronouncements. Tell it how it is Mr Presidente. Good luck and stay safe!

His UN speeches are kinda long and boring usually!

If the US President had a backbone, the first step amadinejad took on US soil, he should have been cuffed and sent to a tribunal to be held accountable for sponsoring terror and inciting genocide.

Did this genocide happen in your imagination? The ex US president Bush should be cuffed and tried in the Hague for the genocide/terror he actually inflicted on Iraqis, Afghans and Pakistanis.

Why does your president incite genocide on it's own people? Are you blind?

Let's see if he repeats his annual prayer for Alla to hasten the coming of the "twelfth imam", the so called Shia Islamic messiah.

Blindman. Why does your president sponsor world terror by backing Hammas and Al Qaida, the group responsible for 911?

Yes im sure iran sponsors al qaida, the same organization that is constantly planting bombs in iran. Why dont you think before repeating lines from fox news.

"Your Face" should think before it repeats lines from fox news.