The Supremacy of Sports over Politics 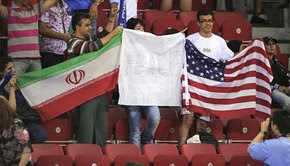 Fans hold up Iranian and American flags with the word "Peace" in between before Iran-USA game. Istanbul, Turkey. 1 September 2010. AP Photo

The Iranian national basketball team fought hard today against the US team in Istanbul during the preliminary round of the World Basketball Championships. The Iranians did not prevail and the strong American team won the game. But the players warmly shook hands at the end of their first ever encounter. Let’s hope cooler heads prevail in both countries in the arena of politics as well.

Not the sporting event we were treated to in the soccer match between IRI and USA in the late 1990s, but good to see such sportsman-like conduct, nevertheless.

I was there,
even the neutral supporters were chanting for Iran.
good match,very fair and respect for the US team. they really good