According to Iranian state media, the Islamic Republic of Iran Air Force (IRIAF) has taken delivery of two new domestically built Saegeh (Thunderbolt) aircraft. The delivery ceremony was held today at the HESA Company airport in Shahinshahr, Isfahan. A total of five Saegheh aircraft participated in a ceremonial flyby.
(click photos to enlarge) 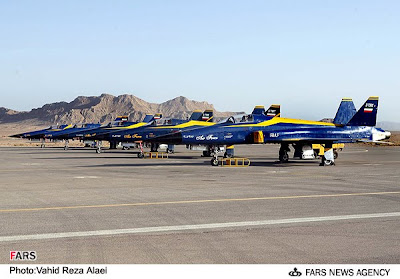 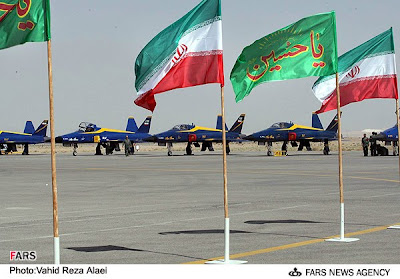 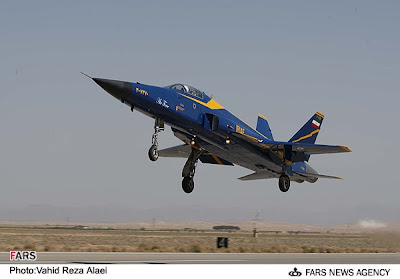 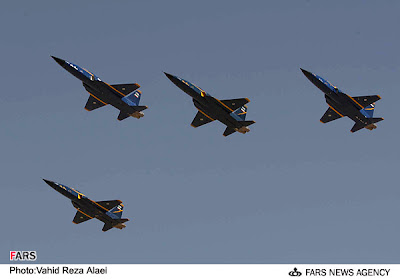 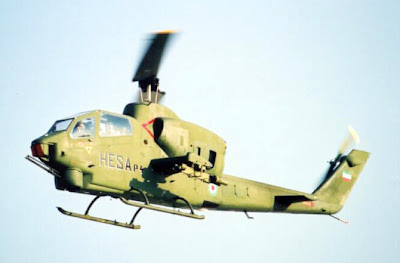 Two additional HESA Tiztak (Bell AH-1J) helicopters were also reported to have been delivered to Islamic Republic of Iran Army Aviation (IRIAA).
Note: It makes for a bold statement for Iran to continue to paint its new Saegeh warplanes in glossy blue and yellow color schemes. Perhaps it was planned for these additions to participate in last month's Sacred Defense air show, but were not completed in time.
Update:
An unverified report at ACIG states that only Saegeh serial 3-7370 made its maiden voyage for the IRIAF today in Isfahan. The other four aircraft participating in today's festivities were Saegeh serials 3-7366, 67, 68 & 69; all flying in from Mehrabad.
It has been pointed out that the new plane lacks standard F-5 wing tip armament rails, as do three out of the other four aircraft. There is a rumor of an aerodynamic problem associated with the Saegah's use of wing tip mounted AIM-9 Sidewinder missiles. If true, this might explain the reason for the continued use of a flashy color scheme: the Saegeh's primary role is that of an air show performer, over that of any secondary role as a combat aircraft. (Again, this is based on rumor.)
Photos: Fars News Agency
Posted by Mark Pyruz at 1:48 PM

Hi Paul. Yes, I wonder if all five are really new aircraft. Upcoming photos may provide form of confirmation, with better views of serials.

Its good to see, your site is doing what you are good at, namely military issues.
Leaving social and political issues to the idiots.

keep the good work up.

Anonymous, thanks for your warm words and support. We are looking forward to your continued readership of the Iranian military posts. Let the fools care about our social and political posts!

They will be used as trainers at best.

Nice paint over obselete aircraft, however, if missiles can't be mounted on wing tips then try mounting missiles above wings like Indians did with Jaguar aircraft.

iran is the most advanced among muslim countries in the field of science and technologies.i would like to give much appreciations to this nation and country.

Anonymous 5:16 PM. What is really "hilarious" is the ignorance of people like you and "Winston". Iran is making progress in producing its own armaments. The Saegheh is not the best example of a combat aircraft but, that's not the point. It is only one of multiple types being produced by Iran, which is in the early stages of producing combat aircraft. After this, more advanced types can be built.

All that you and "Winston" can do is try to make fun as a pathetic attempt at diverting attention away from the fact that Iran is progressing in producing its own armaments.

This progress is what matters most because, it means that Iran is becoming more powerful and reducing its need for foreign armaments supplies. That factt is absolutely unbearable for you anti-Iran, neocons, zionists and American warmongers. That's why you attempt to divert attention away from it.