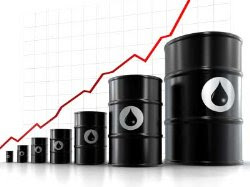 OPEC reported today that the price of its crude oil basket has risen to $107.68 a barrel, an increase of $2.07 over the previous day. Iran’s Heavy is one of the 12 crudes making up the OPEC basket [IRNA, 13 October].
Posted by Nader Uskowi at 2:08 PM

I know.... it must have been the oil companies concocting the cruel and bizarre plot script.. just to bump the oil prices!! :-)

The plain fact is that Iran IS and energy superpower and the world NEEDS Iranian oil.US,China,India are all increasing their energy consumption. ALso, the dollar is getting devalued year by year so yes, an increase in price makes sense. Oil prices will keep increasing because its demand is inelastic and its the most valuable resource a country can hold other than gold.

If the US/Zionists keep up their junior high pranks, oil may hit $500 a barrel and then some. Perhaps, that is what the used car salesman wanted, higher gas prices to sell more compacts. LOL.

The rise in oil prices is in accordance with other early economic indicators, for example the Baltic Dry Index:
http://stockcharts.com/h-sc/ui?s=%24BDI

World economic activity will step up at least until years end (due to holiday sales), but most probabely it's a more robust economic recovery, which will last all along 2012.

Oil wont reach $500 dollars a barrel because if it does Iran still wont benefit due to the corrupt style of regime that is imposed on Iran by the Islamist class.
The world might need Iranian oil but what the Iranian people definitely don't want is to use our oil to pay for HAMAS and Hezbollah and other terrorist causes abroad as well as the complete terrorization of the Iranian people by this totalitarian and demonic regime.

====Oil prices will keep increasing because its demand is inelastic ====


they teach you what happens with SUPPLY when demands remains high as price becomes high and both are expected to remain high?

The world will need oil but it doesn't need Iranian oil. The sanctions are going tom help keep the price of oil high and they will also result in insuring that the cost of obtaining Iranian oil will remain higher than the market price.

Chatting with the blind faith supports of the mullahs is like throwing the rubber biscut off of the wall!

and the sanctions will insure that the regime will make the best rubber biscuits in the world and impoverished iranians will get to enjoy all of them because Iranian exports of everything except oil and foodstuffs are going to dry up.


Instead of all those old subsidies for the Iranian people, now there's going to be biscuits and 20% enriched uranium for each family. (and ten extra years at university because there aren't enough jobs).