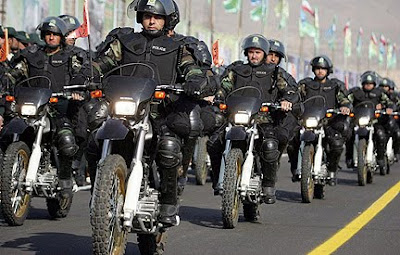 IRIPF/SF motorized antiriot policemen
According to the Los Angeles Times, a source inside Iran claims the Islamic Republic of Iran Police Force (IRIPF, or Iranian acronym: NAJA) is preparing for the potentiality of as many as 3 million protesters taking to the streets of Tehran this Thursday. The occasion is 22 Bahman: the 31st anniversary of the founding of the Islamic Republic.

In addition, the same source told the LAT that the government will be mobilizing 500,000 supporters to rally at the event, where President Ahmadinejad is scheduled to deliver a public speech, with invited members of the foreign press included in the audience. (Remarkable, given the scope of projected protests.)

Figures for IRIPF deployment have not been cited, but the LAT provides a figure for Basij volunteers at ~12,000, with many elements of this force being mobilized from various provinces around the country. Accordingly, it can be projected that the number of IRIPF policemen (cadre and conscript-soldiers) could actually be as high as triple that amount or more, with significant numbers of reinforcements being drawn from local, regional and border protection police forces. 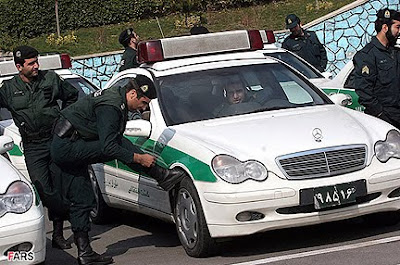 IRIPF Mercedes-Benz C200 police car with cadre policemen
It would be surprising to see the less-lethal antiriot policy be lifted in favor of lethal force. However, given the number of cases of violence inflicted upon IRIPF police officers during the Ashura protests, there may or may not be a number of firearms distributed to key personnel, for purposes of self-defense. It can be assumed that IRIPF police officers would be in favor of such, but Iranian government policy so far- initiated after the June 2009 protests- means to prevent or minimize police-inflicted fatalities wherever possible. Perhaps there will be a greater distribution of less-lethal forms of ammunition provided for use in police officer firearms. We'll see how this plays out this coming Thursday.

It will be interesting to see if the IRIPF makes any changes to the tactics employed by its motorized reconnaissance units, which appeared vulnerable under certain conditions during Ashura, as well as if there'll be more effective use of Islamic Republic of Iran Police Aviation (IRIPA) resources, in terms of sustained, coordinated crowd control management. 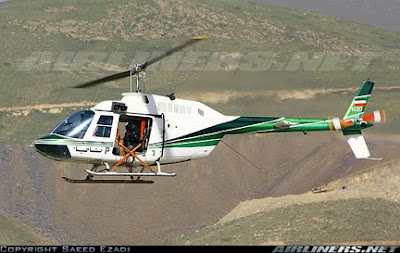 Also, yet to be deployed in meaningful numbers, is the prospect of uniformed IRGC forces actively participating in crowd control operations, as a full or partial military unit(s). Perhaps they will continue on in a reserve force role, to be fully activated upon emergency.
Lastly, it is safe to assume that additional preparations are being made to accommodate large numbers of arrests, at various jail and correctional facilities.
Given IRIPF's crowd control management estimate of potentially 3 million protesters massing for 22 Bahman, this coming Thursday may see the IRIPF's greatest challenge to date.
Posted by Mark Pyruz at 2:27 PM

Anonymous said...
This comment has been removed by a blog administrator.
February 8, 2010 at 3:50 PM

There is another story discussing the potential problems on Thursday at http://www.examiner.com/examiner/x-25304-NY-Homeland-Security-Examiner~y2010m2d8-Ayatollah-Ali-Khamenei-give-all-arrogant-powers-a-punch-in-the-mouth

Citizens of Iran, look to Ukraine to see what these colour "revolutions" do to a country and learn the lessions of Western democracy. The Orange revolution has run out of steam; in fact it never came to the boil.
Why? Because it never amounted to anything more than hype created by meddlesome Western influences which wanted Ukraine in NATO. Ukraine and the Ukrainians were used by the arms lobby and Yushchenko was the pawn, the wrong man in the wrong place at the wrong time.

How many people were in the streets at the 30th anniversary?

How are we to distinguish between pro and contra demonstrators?

The numbers quoted in the LA Times seem wrong to me. The trick now used in the propaganda seems to be to count all people on the streets as "contra" which is of course not real.