For 16 Azar, Iran's law enforcement appeared hard pressed during student protests around the country, centered at roughly a dozen universities and at least one high school. Students appeared to achieve periods of uncontested control of their campuses, enabling them to hold loud and defiant demonstrations. This can be seen in the handful of available videos and photos, particularly at Amir Kabir University. It can actually be said that, in some respects, the students may have managed to exert initiative over their security counter-forces. For their part, the available videos and photos show the IRIPF (Islamic Republic of Iran Police Force) and Basij mostly on the sidelines, unable to effectively counter or disperse an overwhelming presence of students lodged within their university campuses.

All told, Iranian officials claim around 200 arrests were made in Tehran alone, with dozens elsewhere. These figures are low for the size and nature of these demonstrations. There are reports of isolated injuries, but open source video and photos have yet to emerge to show the same level of force used by the IRIPF in previous episodes of post election unrest. It may be the IRIPF was ordered to lessen the level of force used against the student demonstrators, or simply that dispersal efforts couldn't be used as effectively, given the circumstances of successfully assembled crowds and their positions within university campuses. Admittedly, there is not enough evidence or confirmed reports for which to draw any particular conclusion.

The Basij, on the other hand, seems to have acted in their customary manner. However the video and photo evidence depict periods where they were heavily outnumbered and reduced to harassment efforts or, at times, simply taking to the sidelines. Plainclothesman which could have been Basij were also seen filming the demonstrators as well as making what seemed to be targeted arrests. Nonetheless, there are numerous unconfirmed reports of Basidji using excessive and inappropriate force against the student demonstrators.

It doesn't appear the IRIPF was as effective in clamping down unrest as it was in September and November. Both Iranian law enforcement and Green movement activists are sure to draw respective lessons from the results of 16 Azar, for future use in anti-establishment demonstrations in Tehran, as well as other potentially coordinated flashpoints across the country.


An IRIPF motorized patrol. Both regular IRIPF and conscript-soldier elements are seen participating in what looks like a less than well directed action.


A handful of IRIPF officers look on in apparent helplessness at what appears to be the entire student body protesting within the campus of Iran University of Science Technology.

Plainclothes security elements (probably Basidji) filming student demonstrators, while a handful of IRIPF officers and attached conscript-soldiers are seen standing aside outside the school gates.


A student mob engaged in the destruction of school property at Amir Kabir University (AKU) in Tehran. Hard to see in the video, but a law enforcement presence doesn't appear evident.


Confrontation at the broken gate at AKU. Ranking security officers include no less than an IRIPF Sartip Dovom (~General) and a Sarhang (Colonel), among a vastly outnumbered collection of IRIPF attached conscript-soldiers and a few Basidji plainclothesmen (or possibly campus security). The officers clearly look exasperated amid the constant blair of students chanting "Death to Khamenei!"


Crowd control during a volatile confrontation at the broken gate entrance at AKU. An IRIPF Colonel personally intervenes at the point of contact, with only one regular policemen seen in close proximity. Meanwhile, a squad of conscript-soldiers appear in line-formation further back. 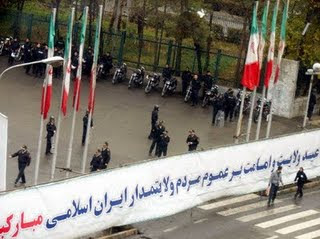 Officers and dismounted motorized elements of the IRIPF assemble at Tehran University in the morning hours preceding 16 Azar activities. Note the use of a non-transparrent banner attached along the front gates of the university, blocking street level line-of-sight into the campus. Motorized anti-riot forces of the IRIPF. Appears to be decision time for dismounting and deployment. 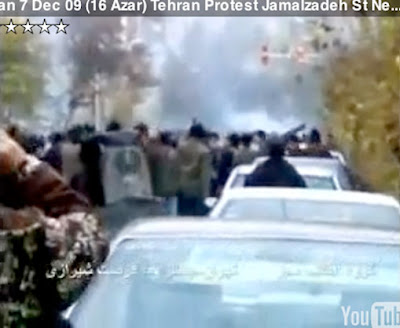 The view up ahead down Jamaizadeh Steet: a skirmish line is engulfed in tear gas. Note the density and resiliency of the demonstrators. 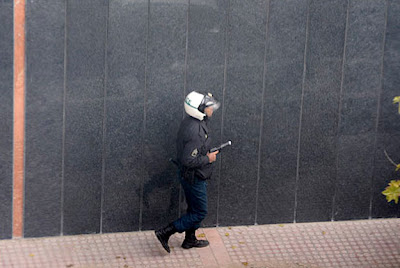 A well equipped IRIPF Ostavar (Master Sergeant), carrying what appears to be a pistol paintball gun. 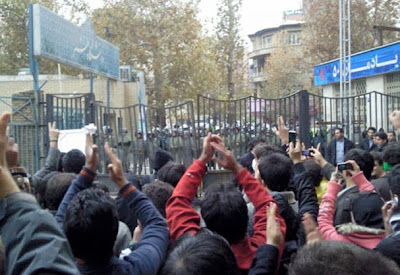 Face off at Amir Kabir University in Tehran. On the other side of the damaged gate (caused by the students), stands roughly two squads of outnumbered conscript-soldier elements of the IRIPF. Center-right in front of the gate can be seen plainclothes elements of either campus security or possibly the Basij. 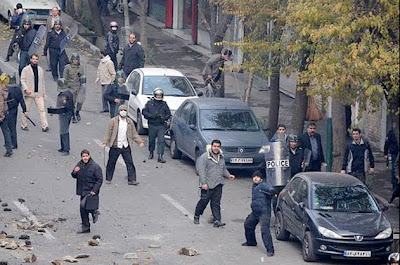 Members of the Basij hurl stones at demonstrating students, amid a cobbled together collection of IRIPF regulars and attached conscript-soldiers. 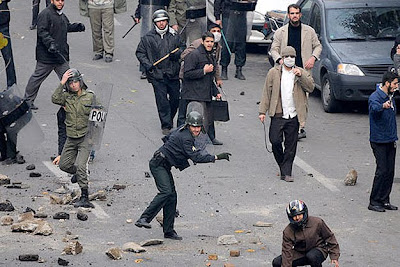 An IRIPF Ghuban Dovom (~Sergeant) follows the Basidji example in a contest of stone throwing, as does a soldier-conscript attached to the IRIPF. Note the curious looking home-made club-sticks of the Basij. The bunched up use of IRIPF regulars, soldier-conscripts and Basij must make for a difficult force with which to exert effective control and cohesiveness. Adding to this, attaching the severely undertrained Basij to Iran's professional police force appears to make it near impossible to maintain proper discipline. A true sense of law enforcement leadership is not evident in this photograph. 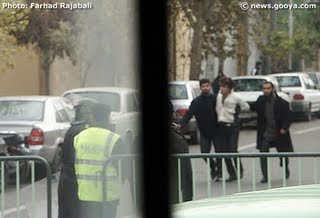 Later in the day, Tehran. Targeted arrest of a student demonstrator by plainclothesmen; either undercover security elements from some branch of the IRI, or Basij. Note the use of crowd control barriers visible in the foreground.
Posted by Mark Pyruz at 5:27 AM

IMHO The student protests are a kind of social proests.
There are some hundert Thousands or millions of iranian students.
but only a few number of them will be hired after Graduating. The most of wnot have any chance at job market.
The marke does not need their skill. what they learn at UNI is useless for the iranian weak economy

During the Shah time the Students were a Elite group, today in every iranian dump town you can find an universitiy.

I know a lot of Unversity graduated try to leave iran and find a job abroad in Europe or US, Canda, Australia.
because of world finance crisis the job market in Western countries donot run good.

that is life, yozu can protest and protest but you can not change it.

studient in iran is the most important element for growing ecconomy for country that why government in iran spend high level of education in the country and almost every day from high level of goverment to the law mp always praise the student in iran they are most imporant to irainan and most smartest in the world,specialy femail student in iran they are element of iranian future and no studend in the world as high ranking level of respect from government to the family then iranian has . this is the fact iran government from supperiem leather to president to mp always praise them of them grown country that is the prime prensiple in iran.

Here is another example of "excessive or inappropriate force" used by the regime forces, in and out of uniform, in the rather conservative and traditional city of Yazd:
http://www.youtube.com/watch?v=22UmqgUwsvc

By the way, in the photos that are posted with the analysis, the excessive youth of some of the basij stone-throwers should be noted. A couple of them look barely 15. Indicates that the regime is scraping the bottom of the barrel, as the vast majority of the millions who are nominally members of the basij choose to stay away, or, more likely, join the opposition.

After being vastly outnumbered within the universities on the Students Day on December 7, the regime brought in thousands of hirelings (organized by the basij) from shanti-towns on the periphery of Tehran, induced with attractive daily rates of up to $200 per day plus food.

Their main staging-post was the massive compound of the former US embassy in Tehran, as caught on camera by the brave citizen-journalist: http://www.youtube.com/watch?gl=US&v=W0eZIX-XTDY

Are you these students are genuinely demonstrating for freedom or are being manipulated by Zionist regime change advocates. Iran should remember The Qajar Shahs era and the looting of its treasures just visit England's Victoria & Albert museum and weep!. This is exactly the same of what is the hidden agenda. Try demonstrating like this in the "land of the free", and get a hot taser for sure!