In a ceremony on Saturday, the production line of a new domestically manufactured naval missile system, named the Zafar (Victory), was officially launched and the first batch of the missile system was delivered to the Islamic Revolution Guards Corps Naval Force.

The ceremony was held on the fourth day of the Ten-Day Dawn (Feb. 1-Feb. 11), which is a national celebration of the anniversary of the victory of the Islamic Revolution in 1979.

The missile system can be installed on various types of vessels, he said, adding that the Zafar missile enjoys remarkable features like light weight, capability to repel electronic attacks, and high destructive power.

“The Zafar missile loses altitude after being launched, and then cruises at low altitude in order to be hidden from sight of the enemy, and in the final stage identifies the target at a low altitude and destroys the target,” he explained. 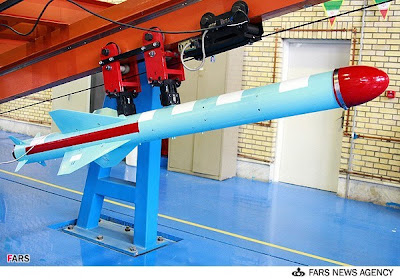 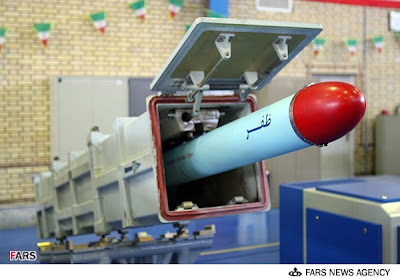 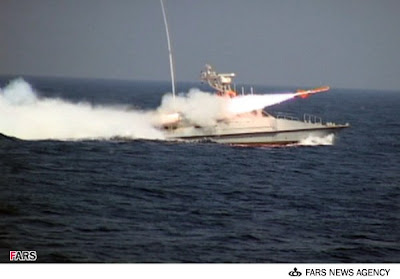 Great news. Perfect weapon for fast attack boats and coastal launch from the Persian Gulf coast. Iran has indeed built an excellent multi-layered deterrence system. These missiles on mobile launch delivery systems will dominate the confined Persian Gulf in conjunction with coastal artillery spread over 2000 kms of shore line, dotted with coves, inlets and natural defence topography. NOTHING WILL MOVE IN THE PERSIAN GULF IF IRAN DECIDES.


A senior Iranian lawmaker says the Israeli regime is very vulnerable at present and threats to launch a military strike against Iran are merely a bluff.

Member of the Majlis Presiding Board Mohammad-Hossein Farhangi said Saturday that based on international and regional developments, Tel Aviv is bluffing in making war threats against Iran.

The Iranian lawmaker stressed that the words of Israeli officials should not be taken seriously because the regime's claims come after its reputation of being undefeatable was ruined due to its defeat in the 33-day war with Lebanon and the 22-day war with Hamas.

Farhangi stressed that any military threats will receive a crushing response from Iran.

The Iranian lawmaker's remarks were made after Israeli Deputy Prime Minister Moshe Ya'alon claimed Iran's nuclear facilities are “within striking distance” and “any facility defended by a human being can be penetrated."

Earlier this month, the US confessed that it was incapable of destroying Iranian nuclear facilities.

They even claimed the IEDs the Iraqi resistance used, with deadly effect, against US troops was an Iranian invention - kid you NOT!!! As if one has to be a genius to make an IED. Heck, even the Taliban(some village boys and goat herders) can make an IED.I guess they must be really smart.NO?

According them, any weapon that kills and American or NATO soldier must be an Iranian one..lol

A missile travelling at close to the speed of sound and with warhead of between 200 - 400kg can/will greatly damage,decommission/ or sink any US ship in Iran's lake, aka Kaleej-e-Fars

Here's another weapon for the warmongers to try to find counter measures for while others are been built. ;)

Don't forget my friends Israels missiles are well within reach of Iran.
Don't be so naive into thinking that the traffic of missiles will flow one way but in Israels case it will be a devastating nuclear response.
Israel will send Khamenei and the rest of his ill mannered clique to their ultimate goal,a place with their seventy virgins.

As Aways......Iran just talks the talk.....hope to see some of you people here back in Iran soon + hope you have have the courage to pick up a weapon....for many like myself it will be a pleasure to make you walk the walk.....cheers!


A senior Iranian lawmaker says the 33-day war with Lebanon should have taught Israel how devastating even the thought of a war with Iran could become for the entity.

Head of the Majlis National Security and Foreign Policy Committee Alaeddin Boroujerdi said Sunday that a war with Iran would have consequences for Israel that are far worse than the war with Lebanon.

The Iranian lawmaker said if Israel commits the folly of waging war against Iran it could change the geography of the Middle East and would result in a serious security challenge for Israel.

Boroujerdi said Iran’s advancements in different fields, which are made despite international sanctions, irk Israel.

“The Zionist regime [of Israel] considers regional revolutions, which have Islamic tendencies and are modeled after the Islamic Revolution of Iran, a serious threat and thinks a war with Iran is the answer to all its security challenges,” he concluded.

what the war in Hezbollah showed Israel was that it shouldn't attack prepared positions with untrained troops.

other than that, israel just bombed the hell out of every target that they felt was worth bombing and then bombed then again.

war with iran would be more bombing and less ground attack.

not at all good for the Iranian people and likely to result in Tehran having whole neighborhoods of nothing but rubble.

you and your senior Iranian lawmaker are a joke...a very unfunny one.

war isn't something about which one should brag.

I'm suprised the Basir inauguration hasen't been covered by this blog... it seems of much more importance (simply because of it's originality) then another kowsar variation....

I have a quick question for supporters of american military intervention against iran. I personnaly am usually inclned to hate the states and take for their ennemies(though i also believe theological backings for a regime are awful), but I'm just wondering how many casualties the U.S would be able to sustain without being abandoned by their population.... I would agree that in a prolonged conflict the us would win, but I dont think the us could have it's population agree to a prolonged conflict...

"but I'm just wondering how many casualties the U.S would be able to sustain without being abandoned by their population"

if there is a global recession because it will be over


A top Iranian lawmaker says the successful launch of theNavid satellite testifies to the country’s progress in aerospace technology and challenge US monopoly in this field.

“Many countries refused to even lease their satellites to Iran, but today the Islamic Republic has made this accomplishment (building and launching a satellite),” Hossein Garrousi said on Sunday.

Garrousi, a member of the Majlis Industries and Mines Committee, pointed to Iranian achievements in different technological fields and said, “In electronic war, Islamic Iran can counter the cyber army attacking the country.”

“Iran‘s aerospace capabilities have increased and this is despite US having monopoly over the technology.”

Navid-e Elm-o Sanat (Harbinger of Knowledge and Industry) is a telecom, measurement and scientific range, which was launched into space via theSafir satellite-carrier.

I presume you meant the ever present Iranian C-701 or KOWSAR & NOOR series. Yes, Iran's SSM and vessel mounted missiles also include the much enhanced C-802 as well as much smaller and lethal TL-10 series.

Most Iranian SSM have active homing and are deployed in very large numbers on sea, land and air. Many of the new variants are helicopter and maritime surveillance aircaft launched.

Iran will be introducing its first maritime recce version of the IR-140 turbo-prop this week and they will enhance the PC-3 Orion fleet operating from Bandar Abbas and Chah Bahar. These will be armed with ASM and homing sonars.


Oh sure, if another state (e.g. the IRI) were to "sink" a US aircraft carrier (causing thousands of US casualties), the US would just shrug its shoulders, wave the white flag, and walk away without any kind of military response. Just like after the attack on Pearl Harbor, the US surrendered to Japan....

These pathetic non Iranian rabble that speak on behalf of a dying regime in Iran on Uskowi just shows what type of war mongering anti Western anti Human anti Iranian twats they truly are.
If they cared for Iran do you think these armchair computer warriors with their inferiority complexes would constantly babble about how Iran is "mighty" and can defeat a superpower like the US?
These sorry state of a human beings are lacking substance in their lives therefore they make up the deference with their constant balderdash.
My message to these sorry and grotesque excuses of a human beings is that the Iranian people no longer want or believe the cheap lies that defines this anti Human theocracy and their only desire is the good riddance of such a charlatan and immoral barbaric entity from our country.
That day of dreams will arrive and will be the nightmares of our anti Iranian enemies the mullahs and their cheap stooges.

Totally agree with you but the morons think otherwise.

That is the point, The regime in Iran has Calculated that It can loose the war but if it scores direct points and causes damage and casualties in a rather public way then it is a winner in the region. No one expects Iran vs US be another Japan vs US. This conflict is measured differently in the Tehran and in DC, and that is a danger for the US administration.