Iran launched a small Earth-observing satellite into orbit today (Feb. 3), marking the country's first successful mission since a failed attempt to put a monkey in space last year, according to state news reports.


The Iranian Space Agency launched the new "Promise of Science and Industry" satellite into orbit today using a Safir 1-B rocket, according to a translation of a statement posted to the agency's Farsi-language website. Safir means "Ambassador" in Farsi.


The new Iranian satellite weighs about 110 pounds (50 kilograms) and was built by students at the Sharif University of Technology, according to a report by Iran's Islamic Republic News Agency.


According to the Iranian Space Agency, the satellite is shaped like a cube that is nearly 20 inches (50 centimeters) wide. It is circling Earth in an elliptical orbit and passes over Iran six times a day. The satellite will fly a two-month mission and is controlled via five ground stations, one each in the cities of Karaj, Tabriz, Qeshm, Bushehr and Mashhad, Iranian space officials said. 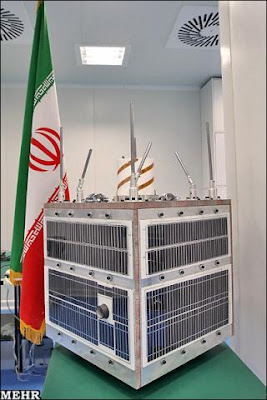 Better late than never. One would assume that the budget for such symbolic acts is worth it.
No matter! we can't wait untill all is well in the middle east before it's nations catch up to the 21st century.

well done no small achievement, for the University students, and Iranian space agency,,,,

Well done Iran! Stay the course of independence and progress.

"Good looking refrigerator!"
Looks more like a Air Conditioner to me.

I think I can hear the folks at JPL laughing from here.

"well done no small achievement, for the University students, and Iranian space agency,,,," In the west amateurs have launched satellites.

A little over a year ago the first private spacecraft to be orbited and recovered was tested successfully here in the states, called Dragon. Expect it to go to the Moon and Mars in the future. (One is being built every 3 months)

"we can't wait untill all is well in the middle east before it's nations catch up to the 21st century."

They still have a while to go, a bird like this is vintage late 50s.

And last but not least he was also named head of the Mars Exploration Program at JPL .

More brilliant accomplishments will be achieved in the fields of satellites and satellite-carriers in the near future, he added.

And last but not least he was also named head of the Mars Exploration Program at JPL ."

Not surprised, so many of the brightest Iranians chose to live here.

That is the primary reason Obama lost my vote.

Plus he canceled the Orion spacecraft.

But I'm glad to see that private companies are taking the lead in Low Earth Orbit while NASA is focusing on Mars and the Outer Planets. Bigelow Aerospace's Genesis space station(s) and SpaceX's Dragon spacecraft look like the ones to watch as they have been successfully tested. I hope in the next decade we will have commercial access to space with these and other companies.

BTW: "corrupt american government" is an oxymoron, all governments are by nature corrupt.

The reason, many overachievers from Iran and many other countries do so well in the USA is not their superior genes, as some here seem to claim, or the Obama administration "pandering to Muslims". It is the result of theeir being able to freely apply their natural abilities to their full potential, free of dictatorships, bigotry, and bias. Thats what makes the USA great.
The Iranian dictorships legacy has been that millions of Iranians are living in exile and most no longer see Iran as their primary country. In fact many renouned exiles would not be tolerated if they were to return to run a space program, or a hospital, etc.

jebbargholi you look like a C&A mannequin, if that looks like a frig.
u & anon 3:58 are the same.

Where is your sense of humor buddy?
As a matter of fact it reminds me of the air conditioning units in Iran.