Attacks on Middle East Nuclear Sites of the 1980's 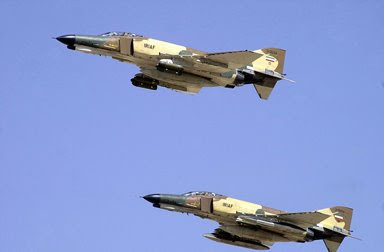 The Islamic Republic of Iran Air Force was actually the first in the world to hit a nuclear reactor site on September 30, 1980. The attack took place eight months before the Israeli Air Force repeated the feat in 1981. This is documented in an open sourced essay titled Target: Saddam's Reactor, Israeli and Iranian Operations against Iraqi Plans to Develop Nuclear Weapons by Tom Cooper and Farzad Bishop. There was a surprising amount of Israeli cooperation in the Iranian effort to neutralize Iraq's nuclear facilities.

Only a few hours after Iraq initiated the invasion on September 22, a telex from Israel arrived in the offices of the Iranian government, starting with: "How may we help?" The same message continued with a very detailed assessment of the Iraqi military, including unit dispositions and locations along the Iranian border, and a list of 124 suggested targets for the IRIAF, ranging from power stations to air bases, with the Osirak reactor site highlighted.

As September 30 dawned four F-4E Phantoms of the 33rd Tactical Fighter Squadron took off from Nojeh TFB.3 at Kaboodar-Ahang, near Hamedan. Flying on a south westerly course, the formation first approached the Iraqi border to meet a Boeing 707-3J9C tanker - escorted by two AIM-54A Phoenix-armed Grumman F-14A Tomcats - so they could refuel in mid-air. Each Phantom was armed with six Mk.82 GP bombs, two AIM-7E-2 Sparrow air-to-air missiles, and a full load of 20mm ammunition for the M-61A-1 Vulcan cannon. After crossing into Iraq at very low level, the formation - led by a full Colonel - climbed so that the enemy early-warning radars would paint it just long enough for the Iraqis to think they had fixed the direction in which the Iranians were heading. Moments later, the flight dropped back down to a very low level, where the Iraqis were no longer able to track it. Then the Phantoms parted - the leading pair continued in the same direction as before, towards a powerplant just south of Baghdad, while the other two turned for Tuwaitha, further south. As the last two F-4Es approached the Tammuz building site, they remained very low, pulling up at the last moment, barely 2.4 miles (4km) from the target, and then the aircraft remained high for a very brief period. To the surprise of the crews, the Iraqis did not fire even a single missile or shell at them. Approaching on a direct route and executing a perfect attack, the pilots swiftly acquired their targets east of the reactor buildings, rolled out and released the 12 Mk.82s, remaining in the air over the target for only six seconds! Simultaneously, the two other Phantoms hit their target, taking out the power supply to Baghdad for most of the next two days.

Cooper and Bishop also provide details of the Iranian H-3 Blitz, the Israeli strike on Osirak, as well as Iraqi attacks on Bushehr. Recommended reading.
Posted by Mark Pyruz at 9:45 PM