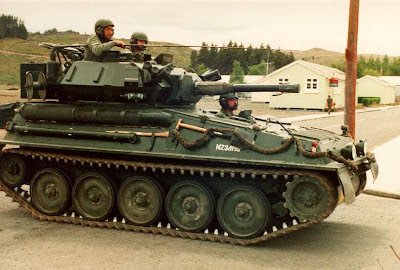 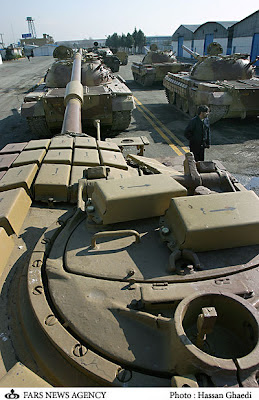 He added that a project to modernize engine and fire control systems for T-55 tanks is also underway.

Col. Arab-Beigi said the self-sufficiency unit is also working on projects to enhance passive defense systems and secure the country's military sites. He said the unit had been producing tactical vehicles since 1993, adding that it has also started work on anti-shield military equipment and electro-optical surveillance systems.

Above photos, top to bottom:
- Scorpion light tank, believed to be the basis for the Tosan (Wild Horse or Fury) Rapid Response Tank.
- Turret view of an updated Iranian T-55 type tank.

Hi, great post. I just dugg it. I'm michaelwong38 on digg.com.
Also was wondering if you'd like to exchange links with me?
If yes, please leave your blog url as a comment at:
http://bigmoneylist.blogspot.com/
I'll link to you first, then when you have time link back k?
Thanks, Michael
BTW--I'm michaelwong38 on digg. If ever you want something dugg, just send me a shout anytime.

Are those reactive armor tiles on top of the tank? If so, is the assumption that those tiles will degrade the effectiveness of top-down attack weapons, such as our Javelin?

Well, if that is true, what impact do you think it would have on the international relations and what the American and Israeli response will be?
Ellie