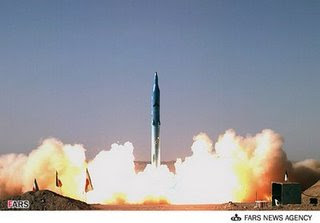 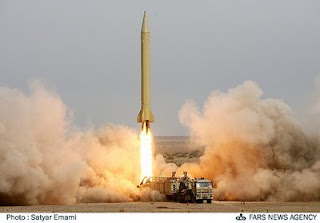 The Sejil, however, is distinctively different from Shahab-3, a long-range ballistic missile, last test-fired on 10 July 2008. They represent significant advance in Iran’s rocket capabilities.

Structure: Sejil 2 is a two-stage rocket, allowing it to reach higher altitudes, increasing its range, and to accelerate more efficiently when the first stage drops off.

Speed: Sejil 2 Much faster than Shahab 3.

Navigation: Sejil 2 uses improved positioning system receivers on the launchers and in the missiles, making them more accurate than Shahab 3.

The Sejil, Shahab as well as Zelzal and Fateh missiles are manufactured in Iran by the Aerospace Organization of the Ministry of Defense.

death to ahmad and homeini said...

this poor guy needs some "sheyaf e koon" in order to be able to speak something else than bullshit... :)

Dfintly with help from russia or north korea but NEVER EVER underestimate the iranians. Did u know that they are the most successful foreigners in our own america? There was a book written about it. Or that hundreds of our college teachers are iranian?!
And they are making progress in science every day. U can check wikipedia 4 this. As history shows the islamic golden age was so golden because of them. They are no stupid arabs.

I agree. Ive had contact with them. The smartest people in middle east are iranians and israelis. I think that if the people and the government were united، and they had a loyal government, within decades they would become one of the strongest countries in the world. If not a super power within a century. They have the potential.
And when you are in a hurry to get such weapon why make it when you can buy it? Which choice would be smarter?

@anoni
Yes iranians are smart. But Arabs are smart also, but just their stupid puppet governments dont let them develope, especially in saudi arabia.
but you will see the development in the now free egypt.
and all iranians living in uk or us: please stop being rassist against arabs, this is just stupid.....