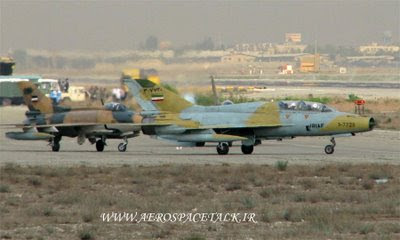 An Iranian F-7 jet fighter crashed today during a training mission near Omidiyeh Air Base in Dezful, in southwestern Khuzestan province. The Iranian authorities did not disclose the fate of pilots.
It appears that the fighter was an IRIAF Chinese-made FT-7. Iran started receiving these MiG-19 type fighters in mid-80s and it is believed to have more than 25 in service today.
The file photo above shows a pair of Iran’s F-7 and FT-7 fighters getting ready to participate in Iranian Military Parade 2008, Tehran, 17 April.
UPDATE: Sadly the two pilots on board the FT-7 were killed during crash landing.
Posted by Nader Uskowi at 4:39 PM

Back to our discussion, if there was not really a purpose, why don't you write about the positive sides of Iran? Why are you trying to show a bad face? Write about the unique climate, cuisine, diversity of languages and dialects, natural resources, culture, handicrafts, costume, etc. That's why you're called a traitor. You try to show the dark side. You should be ashamed of yourself for sucking up to Americans. Not to mention that they are in deep shit now! They don't know what to do in Iraq and Afghanistan and they don't dare attacking Iran, regardless of all the motivation people like you are giving them. Their ass is kicked so hard in Iraq and Afghanistan that they are crying out load! So I'll see you in the day that traitors all come and kneel and beg for mercy, just like the other traitors, Monafeghin, did! Iran is different from Islamic Republic.

Wasn't there at least one other crash fairly recently? And do you think this speaks to the difficulty of maintaining their patchwork logistics system? Or just a couple unlucky mishaps with no clear traceable cause?

olaAn Iranian F-7 also went down last July 2007. Technical failure is listed as the cause for both crashes.

The Chengdu F-7 is listed as a defensive weapon, with spares coming from China. The type has a history of problems with its hydraulics system.

and dont forget IRIAF non american
jets also not new .F-7s are 18 years old,Mig-29s and SU-24s are about same age and ex Iraqi Mirage F-1s are about 20 years old.

You're right to pint out the age of these aircraft, Majid. Considering the lack of factory support for some of these types, it is amazing the Iranians are capable of keeping their air force flying to the degree that they do.

The FT-7 is a version of the MiG-21, not the MiG-19, as your article claims. Just thought I'd mention that.

It is impressive that their entire airforce didnt colapse after being cut from US and 8 years of war... With such brain drain.
Duh! what do u expext from chinese products?! Even if china made you a rock so that u could smash some ones head, it would turn into dust in ur hand...That was a weird thing to say...!