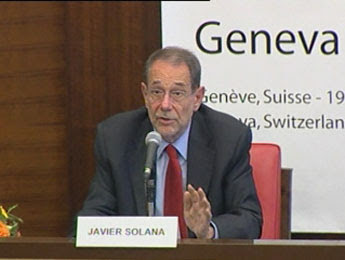 World major powers today gave Iran two weeks to accept the “freeze-on-freeze” compromise as a start to end the nuclear standoff. Iran’s chief nuclear negotiator, Saeed Jalili, was not ready to accept the offer at the Geneva meeting, attended by US Undersecretary of State William Burns.

The freeze-on-freeze compromise requires Iran not to expand its current level of uranium enrichment for a period of six weeks, while the UN and the West would not impose any new sanctions on Iran. During this confidence-building period, preliminary talks on a long-term solution to the nuclear standoff will take place.

Iran was expected to accept the compromise during the meeting in Geneva today. Now it has two weeks to accept the freeze-on-freeze approach. Iran could be subjected to new sanctions at the end of the two-week period.

The inconclusive outcome of Geneva meeting dimmed hopes of a quick turnaround in nuclear talks.