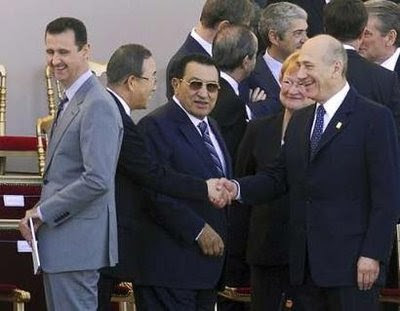 Since the victory of Islamic revolution in Iran, Syria has consistently been Tehran’s closest ally. All that began to change when Ahmadinejad came to power three years ago. His policies and rhetoric have isolated Iran to an extent not seen in the thirty years of the Islamic Republic. Syria, the closest ally, is probably no more.

This is the most damaging consequence of Ahmadinejad’s presidency for Iranian foreign policy so far, and it could well be the beginning of worst days to come; notably the possibility of a military attack on the country.
Posted by Nader Uskowi at 9:17 AM

Yes. Things are getting increasingly curious over there with with EU and now MU.

The photo reminds me of a bunch of mob leaders though. Iran is starting to look pretty isolated.

honestly, this picture is not very tellingg of whats really going on. Despite assad being at this meeting, why did iran and syria decide to form a new bank together? why are they still keeping(and probably secretly) uprading military relations and MOUs? To me, Despite Assad bein at that meeting, it still doesn't mean things on the ground have really chaned. Assad is pretty isolated too, and worst of all, his weaker arab country has no oil. Iran is still an asset to syria. If syria cuts ties with hezbollah, iran, hamas, PIJ etc, it will lose a chunk of its legitimacy, so i think to think Assad is breaking the iran-syria link is pre-emptive and not correct.

syria didn't abandon iran during the iraq-iran war, why would they do so now?

syria's importance is to a large part based on a flawed western attempt to divide and conquer, in this the syrians will exploit openings for their own self-interest, but ultimately the syrian regime understand that the one true partner they have is iran, and if iran is taken down they'll be next.

assad's appearance in paris is a triumph of syria-iranian strategy of steadfast opposition to western demands, syria has been isolated, threatened and even bombed, but today iran has a trojan horse in the western camp, and its position has never been stronger.

Great blog you have here.
You may be reading to much into this photo op. I think the shift in Israeli relations vis-vis Syria can much more solidly be tied to Israel's failure in the 2006 war, it's failure to destroy the Hamas government in Gaza, and the West's relatively ineffective campaign to isolate and weaken Iran through Sanctions. Engaging Syria is plan c or d, not plan a. They would have much rather bulldozed it like they did Iraq. It's more than likely this strategy will end up as just the latest in a long line of embarrassing failure for the Zionists and Bush.

Thanks Masoud for your kind words, and thanks to all for leaving great comments.

In this post, I tried to look at the issue from an Iranian perspective. There is no doubt that the West could easily fumble the ball in its attempt to get close to Syria, as we have lately not witnessed many successful executions of policy by the US or the allies.

From the stand point of Iran, however, I argue, that the current Iranian foreign policy is opening doors for Iran’s opponents and is weakening Iran’s stand with its friends and allies.

The West cozying to Syria is above all a means to isolate Iran further. Whether they can be successful or not, we need to realize that Iran is, by its behavior, making it much easier for the West to succeed.

If what I am saying is correct, or has some elements of truth in it, then Ahmadinejad’s foreign policy could well be the cause.

I am looking forward to hear from you all in this and future posts.