In addition, Iran claims to be producing a military variant of the Bladerunner 51, often described as the world's fastest boat. The Bladerunner 51, weighing 16 tons and 15.5 meters long, is manufactured at the ICE Marine shipyard in Britain and can reach a maximum speed of 65 knots. The boat was reportedly acquired by means of South Africa. 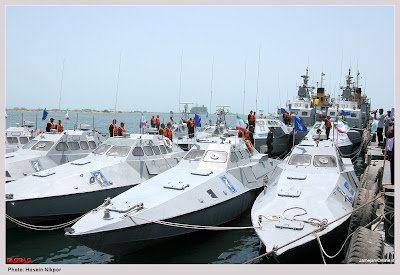 Collection of Paykaap (IPS-16) and Tir (IPS-18) class fast attack craft. Note the non-uniformity of construction among the front row of vessels. 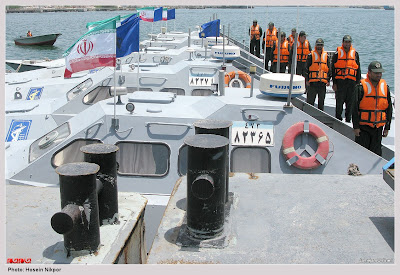 Also apparent are variations in accoutrements and fittings. IRGCN officers are seen standing amid their vessels. 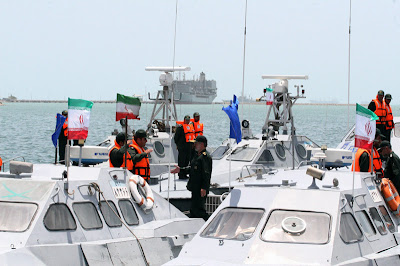 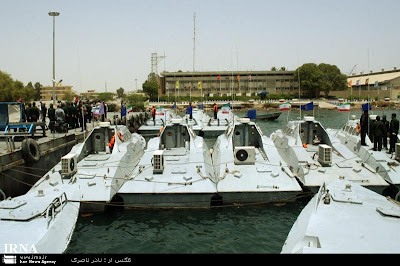 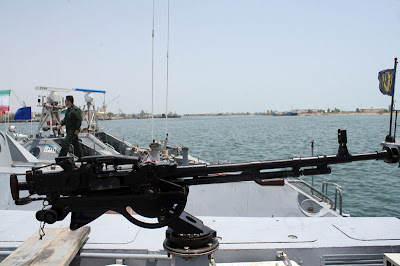 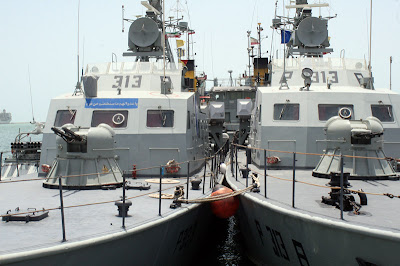 P313-9 Hadid and P313-8 Falaq, Thondar class missile craft. A MRLS armed HSPB is just visible to the left, as is the IRIS Kharg off in the distance.

I hope those (Sunni-)Muslim collaborators pay close attention to their kind of bigot "allies" posting here, because they wil be next on the US obliteration list.

...and then all their spoiled little brats will have to learn "American Gulf" in school.

You are right. But i think Iran will win.

Iran is not an arab country,and i am sure Iran has not displayed all its real power.

I have a feeling its all to sell second class weaponry to the ARABS.

I heard of scaled down F15,s for Saudi Arabia for a very high price , so as to finance new jets for Israel with saudi money.

Iran seems the boogieman and somehow helps to sell the junk to Kuwait, UAE, SA etc...

Arabs have bought over $200 billion worthless downgraded weapons from the west, particularly US and UK. The airbase at Tabuk is filled with rotting crates and weapons dating back to the 70's that the Saudis can't operate or even maintain. The "performance" of the Saudi "military" was on ample display in Yemen recently when the lightly armed but highly motivated Zaidi Shias gave them a sound drubbing.

The west just exploits the illiteracy and lack of Arab global sophistication to bilk of them of billions by selling totally useless weapons and other trinkets at inflated prices and "service contracts". Even according to the inflated recent Saudi census, the local born bedouins have population of less than 18 million (closer to 10-12 in reality) and around 70% are below the age of 17. This hardly constitutes the pre-requisite strategic mass necessary for a viable "military power" where women 53% of the population can't even drive cars. The number of abandoned vehicles on the Mecca to Medina and Riyadh freeways are a glowing testement to the fact that most Arab drivers have not mastered the "complex" process of changing a spare after a flat tire let alone maintaining an F-15.

Saudi Arabia and UAE are the typical patsies for US sponsored Iranophobia and peddling of Persian bogeyman hype.

Iran is now a new superpower in the whole region of the middle-east.This had been approved and described by at least two US high ranking official.One of them was the former Commander of the US Central Command,Army Gen.John Philip Abizaid.Check it out.

Why is the paint job on these boats so poor?

Seems like Iran is trying it's hardest to start a war. First with the unsuccessful Iranian submarine attack on the unarmed Japanese oil supertanker last month and then instigating the Iran backed Lebanese army to attack Israel and murder one of their soldiers. You play with fire and you will eventually burn yourself.

to the anon with the paint job problem....

I wish I had your kinda problems...

The message if american inspect any iranian boat or ship,there will be a retaliation,even if it scalates to war.

Do not confuse you,the americans are those who hidden of Iran.

Rule 3 of asymmetric warfare:
small enough to hide but large enough to bite !


PS:
US CENTCOM has this BIG RED BUTTON labeled "make them drop from the skies like flies" and as soon as all those shiny Arab $gazillion priced F16's dare to fly the wrong way (to Israel instead of Iran), Petraeus will go WHAM !

Just a realistic informational note to the technologically challenged posters here. The whole rationale behind big naval ships is obsolete in the era of hypersonic and highly accurate GPS guided stealth missiles that are incapable of being detected.

Iran has wisely invested in low-cost but high-tech asymmetrical warfare capability, particularly for the shallow confines of the Persian Gulf where any big ship, paricularly a carrier is a "dead-duck". BTW, the US understands their predicament with billion dollar CVN's and keeps them out of the Persian Gulf. Only a few ageing destroyers with the 5th fleet are on station at Bahrain and UAE. The fate of the "advanced" Zionist missile boat Hanit is a glimspe of future naval battles.

New generation of Chinese missiles which Iran will eventually acquire also promise to put an end to the era of BIG NAVAL SHIPS permanently. In the missile age the days of carriers, destroyers and "gunboat" imperialism are long gone. A million dollar SSM or SSBN with Advanced Kinetic MIRV-HE warheads can ruin the day for a multi-billion dollar slow mega ship and 4000 sailors in a few seconds.

China is developing a powerful new missile that can take out aircraft carriers, a development that AP says could go a long way toward finally ending US dominance at sea and make it riskier to intervene in any potential dispute over Taiwan or North Korea. Final tests are expected this year for the Dong Feng 21D, would could be launched from land to destroy a carrier 900 miles away.


"The Navy has long had to fear carrier-killing capabilities," says an expert at the nonpartisan Center for a New American Security. "The emerging Chinese antiship missile capability, and in particular the DF 21D, represents the first post-Cold War capability that is both potentially capable of stopping our naval power projection and deliberately designed for that purpose."

Has Iran the sunburn and kh-55 missiles? Is there some evidence?

There's a gray area between incapacitating (cf. thearkenstone.blogspot.com) and killing a carrier.
I don't know much about US nuclear posturing (at www.armscontrolwonk.com you can read up on this subject) but I think it's clear to everyone that after a real kill, with thousands of casualties comparable to 9/11, they will go nuclear.

Small craft like these need shore bases and shore based support. I am certain that any bases along the Iranian shoreline of the Arabian Gulf would be the very first things to disappear under airborne attacks, launched from US Carriers well away from the Gulf area.

It would be a very sad day if the Iranians ever came to believe their own propaganda. Very sad for them .

We had to delete 13 August 5:28AM post for use of vulgar language. This blog offers opportunities to all its readers to present their points of view on critical issues facing Iran and the region. We cannot, however, permit use of vulgar language and personal attacks. They run against the very nature of the intellectual discourse favored by this blog and the great majority of its readers.

Clever boats....I remember during the Iran Iraq conflict, the US couldnt lock on with Harpoons on the small Iranian vessels....hence the stealth description always used.

I just read something here pertaining "advanced Chinese missile technology and strike capabilities"..and how this will level the playing field against the American Navy. Now, if this is true, why can't this stupid Chinese made calculator I just bought work properly???? Oh, by the way - you may not realize this over in the middle east, but the Chinese....well, they still use sticks to consume their food with, you may want to think about that before getting into a furball with the American Navy.

Iran already fought against the USA and lost back in the 1980's. Iran will never defeat the USA because Iran couldn't defeat Iraq. If you can't beat a weak opponent next door, what makes you think you can beat the USA? Oh right, the USA has beaten them before. If Iran could really beat the USA, they would've done it by now. We're fighting two wars and Iraq and Afghanistan and Iran still sits on the sidelines not willing to fight toe-to-toe. C'mon Iran, do something wussies!

We're fighting two wars and Iraq and Afghanistan and Iran still sits on the sidelines not willing to fight toe-to-toe. C'mon Iran, do something wussies!

Don't worry, asshole. We will do something after we achieve our nuclear goal. God willing.

The Persian Gulf is their backyard with an Iranian controlled shoreline from the Pakistan border all the way to Basrah, Iraq. Its not just a naval encounter we are facing there. The IRGCN and the rest of the Pasdaran have unmeasurable resources and motivation to defend Iran as well as initiate an unprovoked attack when they want or need to. Although Iran cannot defeat the US or the USN, it can raise the cost of our involvement. A slightly damaged USN warship is a victory for Iran who know they cannot win a war. Every one of these thousands of small boats can hurt us. The Cole was hard steel against an inflatable boat. We are not vulnerable. They can also shut down Hormuz and we will pay $8 a gallon for gas. Do not think Iran cares about its Arab neighbors or the world economies, particularly if it feels the Islamic Revolution is about to collapse. It is the Persian Gulf and never has been the Arabian Gulf and never will be. They have no concerns about the Arab economies. What we need to do is seek a change of their government and hopefully show the Iranian people that the Pasdaran are now the new Pahlavis. One brutal thief has replaced another. The IRGC and Basij have only one a set of weaknesses that will bring it down. It is their brutality, corruption, greed, and umbriddled arrogrance of power over the Iranian common people. I pray Iran can shed its own Pasdaran shackles and that the US military stays out.

Cute boats. A helicopter with Hellfire or Sea Skua could sink these things from far outside heavy machinegun range. The British did this in the Gulf War, remember?

In the event of war, expect commercial shipping to be held out of the Gulf for a few days while Western aircraft clobber Iran's air force, smack down their shore-based missile batteries, and smoke these little boatsin their dozens, just like turning a flamethrower on a wasp nest.

I hope we do not see war between Iran and the U.S. But if we do, much of the Iranian hardware that people now think so impressive, will turn out to be so much cannon fodder.