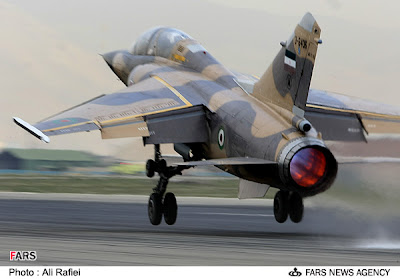 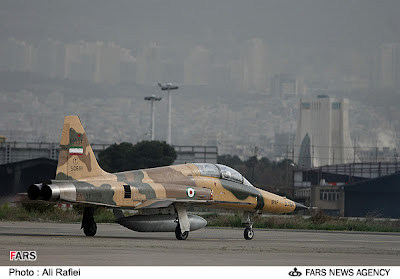 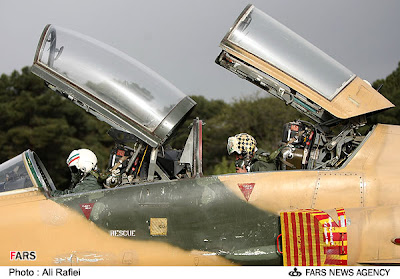 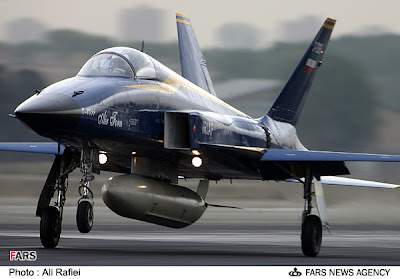 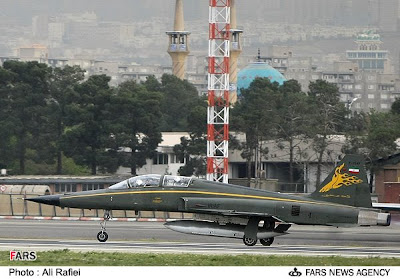 Above pictures, taken by Ali Rafiei of Fars News Agency show some of the aircraft in action today over Tehran’s overcast sky. [Fars News Agency, 16 April].
Posted by Nader Uskowi at 12:28 PM

It is interesting to note that IRIAF has mastered the maintenance of French Mirage F.1EQ/BQs also. IRIAF has been under a silly counter-productive US "embargo" since 1979 and despite it Iran has been able to keep over 350 US aircraft and over 400 US manufactured helicopters in pristine flying condition, including the 100 plus HESA redesigned COBRA gunships and Chinooks C-47. This is a great reflection on Iranian ingenuity, independence, national determination and the high caliber of Iran's engineers, technicians and manufacturing facilities. Most of the operational F-14A, F4E and F5E's have been refurbished and upgraded to US, Russian, Chinese weaponry standards as well as Iranian Fattar missiles and smart laser guided bombs. The Russian SU-24 and MIG 29 also appear to be in first rate operational shape with many modification, including aerial refueling. The domestic aircraft production of Azarkash S80 and many variants of drones is also progressing rapidly, giving added capabilities. Iran also has serious world-class heavy airlift capability with over 100 Il-76, AN 74, Iran140, Boeing 747 and C-130 aircraft. A refurbished air-tanker fleet has also increased the reach of the IRIAF giving it a force multiplier effect. Most of the guided ordinance including the Sattar, Qased and Fatter family are also designed and manufactured in Iran. The over 50 F14A also pack the new Iranian designed upgraded AIM54A and Russian Vympel R-77 missiles.

All kudos to IRIAF/IRGCAF and its brilliant engineers and skilled pilots.

death to ahmad and homeini said...