Facts are now in concerning the tragedy at the 2009 Sacred Defense air show in Tehran. On the 22nd of September, at 09:02 hours, IRIAF Il-76MD "Simorgh" (Baghdad-2/Adnan-2, No. 1 with 5-8208 serial) crashed near Varamin City, killing all seven crew members aboard. At 09:02 hrs, the pilot radioed to Mehrabad control tower that the aircraft's engines under the right wing had caught fire. The tower signaled the aircraft to attempt an emergency landing on 29LeftRWY. Upon final approach, due to the aircraft's undesirable angle of attack, the over-fuselage rotordome detached and collided into the vertical tail sections. After that, the aircraft suffered a catastrophic crash.

Video from the crash scene: 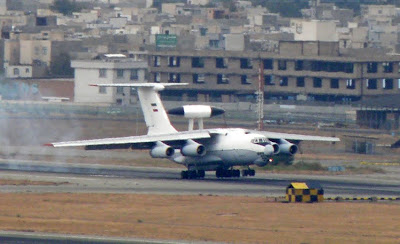 Above: Photo of ill-fated IRIAF Il-76MD taken the day before the crash.
Posted by Mark Pyruz at 5:12 AM