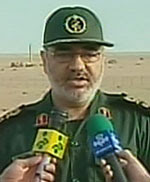 "The arrogance knows pretty well that not an acre of our country can be occupied. Those taking lessons from Ashura will never yield to the enemy," said Salami in an address to a group of people in a ceremony held to commemorate a group of the 1980-88 Iraqi imposed war martyrs.

He said Iran is invincible and highly powerful than ever. "Former Soviet, (former Iraqi ruler) Saddam Hussein and Taliban couldn't stand the US and were collapsed one after another but Islamic Iran has for 30 years been targeting the US policies on whole the universe." He added, "We are today highly powerful and can target enemy everywhere on earth. That does not represent all our power; Our power lies in our faith, our statesmen's will and in our cohesion and unity."

Interesting comment depicting Iran’s successful resistance, during which time the USSR, Hussein’s Iraq and the Taliban were knocked out one by one.

Email ThisBlogThis!Share to TwitterShare to FacebookShare to Pinterest
Labels: IRGC