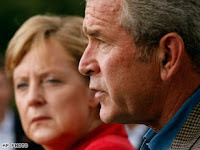 Merkel with Bush at president's ranch
in Crawford, Texas on Saturday
(AP Photo)
German engineering giant Siemens pulled out of all new business dealings with Iran. The move came on the eve of a visit to Washington by German Chancellor Angela Merkel.

Germany’s three biggest banks, Deutsche, Commerzbank, and Dresdner had already stopped doing business with Iran. Their decision to leave Iran came after US Vice President Dick Cheney warned that firms remaining in Iran would have trouble doing business in the US.

Merkel told President Bush on Saturday she would be willing to support a third round of UN sanctions against Iran if the Iranians did not halt their uranium enrichment program.

Merkel and Bush called Iran’s nuclear program a serious threat but said they both prefer to resolve the standoff through pressure, including economic sanctions.