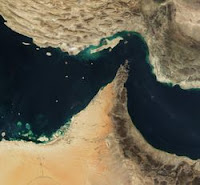 The Straits of Hormuz
Islamic Revolution Guards Corp Navy (IRGC-N) will be part of the naval maneuvers to be carried out in the Strait of Hormuz and Gulf of Oman next February. The Islamic Republic of Iran Navy (IRIN) will conduct the war game.

The maneuvers, codenamed “Ettehad-86” (Unity-2008), will last for one week. The exact dates have not been announced yet.

IRIN Commander Rear Admiral Habibollah Sayyari said in Tehran that the Strait of Hormuz shipping lanes will not be closed during the exercise. The comment could be a veiled threat that the aim of the war game is indeed testing the capabilities of navy equipment, including the new mini submarines, and naval tactics to close the Straits if attacked.

Yesterday was Iran’s National Navy Day (28 November). To mark the occasion, the navy launched a new, indigenously developed Ghadir-class coastal (light) submarine. The navy is expected to launch two more subs of the same class in the near future. These submarines are expected to displace 123 tons when dived.

The new submarine is the second locally built. In 2005, the navy announced that it had built its first Ghadir-class sub. The navy also possesses three Russian-built Kilo-class diesel submarines.

The Navy also launched a new frigate named Jamaran (Jamaran is the name of a neighborhood in Northern Tehran where Ayatollah Khomeini kept his official residence after he came back from exile to lead the Islamic revolution in February 1979). The 1,350-ton Jamaran was built in Bandar Abbas as an updated version of the older frigates that went into service some 40 years ago. The navy already operates three of these older frigates, with Jamaran counting as the fourth frigate.