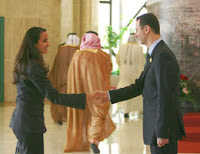 Syrian President Assad greeting Qatar’s Sheikha Hind bint Hamad
Arab Summit . Damascus . 29-30 March 2008
(Photo: Gulf Times)
The Arab Summit subdued in the absence of the leaders of Saudi Arabia, Egypt and Jordan today ended two days of meeting in Damascus by warning Israel that Arabs would “review” their peace initiative unless Israel changed its behavior.
The Arab peace initiative of 2002 offers Israel peace and normal relations with all Arab countries in return for withdrawal from all territory captured in the 1967 war.
On Lebanese crisis, the summit declaration broke no new ground, saying the Arab leaders stand by an Arab initiative which endorses army commander Gen. Michel Suleiman as a consensus president.
Iran, represented at the summit by its foreign minister as an observer, objected to the summit's support for the UAE claim to three islands in the Persian Gulf. Iran's foreign ministry spokesman said the claim was “vain and baseless” as the islands were an inseparable part of Iranian territory.
Posted by Nader Uskowi at 11:18 AM