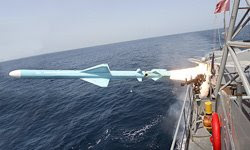 The Fars News Agency photo reportedly shows Nasr-1 missile at test launch
Gulf of Oman
6 December 2008
Iran has test-launched a new missile during its naval war games in the Gulf of Oman. Nasr-1 (Victory-1) missile was launched on Saturday from a warship and reportedly hit its surface target at a distance of 30 km (19 miles).

The Iranian Navy has deployed over 60 ships and other military hardware during the Ettehad-87 (Unity-08) naval exercises.
Posted by Nader Uskowi at 1:33 PM

Any idea what this is about, Mark?

From that picture it looks like an updated C-802? Not a great range, but probably an improved missile either way. Iran's military seems to currently be in great vigilance mode..

Dear Kemjika, allow me to refer your question and comments as well as Masoud's to Mark Pyruz. He's the expert.
Thanks,
Nader

So this goes about 19 Miles huh?

Perhaps an upgrade that will give them more precision of Hormuz in the event of an Israeli/American attack?

Does anyone know what the guidance system is on this thing?

Reports from Iran claim a test firing of a new Nasr-2 missile. It could be based on the Chinese TL-6 (Tian Long - 6) anti-ship missile. Guidance is presumed to be radar guided/inertial navigation system.

The Nasr-1 is same as "Valie Nasr-1" Anti Ship Missile. It can be launched from ship as well as air launched.

(The Fars photo does indeed look a lot like a previous test of a C-802Noor.)

I would just add that the Nasr can probably be armed with a television seeker. It can also probably be fired from land/vehicle.

Yup, Wikipedia says Nasr is basically reverse engineered Iranian version. As long as the chinese keep siphoning off older, but potent weapons to Iran, attacking Iran will be harder and more catastrophic.

Looks like the Z-4 embargos and
sanctions have back fired. Iran
used to be a great military client of the west. Now she is posed to
destroy the intruding & threating
navies of the Z-4, if any attack comes from the same.