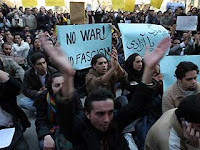 The protests were held to mark 16 Azar, the National Student Day. 16 Azar has been observed by Iranian students since 1954 when three students were killed by the police at the University of Tehran campus during a demonstration against the visiting US Vice-President Richard Nixon and against the government of the shah.

This year’s demonstrations specifically targeted Ahmadinejad government and the intelligence ministry’s detention of student activists in the days leading to the National Student Day.

“Death or Liberty!”; “No War, No Fascism!” and “Free Student Prisoners!” were among the slogans chanted by the students today.
Posted by Nader Uskowi at 6:58 PM